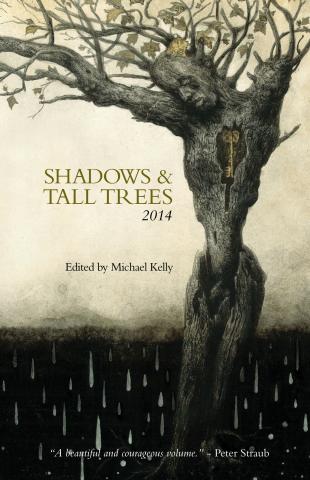 Shadows & Tall Trees No. 6 marks the series’ transition from a traditional journal to an annual anthology. With more space for more stories, series editor Michael Kelly successfully continues his exploration of what Ellen Datlow has called “low-key horror.”  This collection is haunted: place-haunted, past-haunted, people-haunted. These are stories of when the membrane just begins to tear.

Shadows & Tall Trees (“S&TT”) continues to provide deep cuts of understated horror.  Mr. Kelly’s selections focus on the resonance of atmosphere and the characters trapped within, rather than the louder elements of much contemporary dark fiction. While ghosts (and worse) may appear, S&TT doesn’t aim to terrify or disgust readers, but rather to unsettle and instill a deep unease.

Bookended by two meta-fictional texts – the negative-space how-to of “To Assume the Writer’s Crown: Notes on the Craft” by Eric Schaller and the literal last words of David Surface’s “Writings Found in a Red Notebook” – the 17 stories here employ diverse lengths, structures, and techniques.  Brief sketches of nightmares, like F. Brett Cox’s near-stream-of-consciousness “Road Dead” or C.M. Muller’s half-dreamt “Vrangr,” linger in the ambiguity of what goes on beyond darkened windows. As counterpoints, however, Myriam Frey’s “The Statue” and Alison Moore’s “Summerside” are equally compact but are so concretely constructed that the dissonance struck by the intrusion of the weird rings beyond their brevity.

The mid-length stories, then, allow the authors and readers more room to explore a variety of interrogations of reality’s borders. These threats come in guises such as the mysterious strangers behind closed doors of R.B. Russell’s “Night Porter,” the body and mind altering phantasmagoria of Michael Wehunt’s “Onanon,” and a convergent haunting of the present and past in “The Space Between” by Ralph Robert Moore and Ray Cluley.

It’s not all gloom, however.  Kaaron Warren skillfully blends human empathy with the surreal and vivid setting of the aptly named “Death’s Door Cafe.” Stories like “The Golem of Leopoldstadt” by Tara Isabella Burton or Conrad Williams’s “Shaddertown” also burn brightly as their characters struggle against the past’s dark burden.  These welcome tonal variations keep the collection from becoming overwhelmingly grim.

The two centerpieces of S&TT 6 – both in terms of length and narrative expanse – are V.H. Leslie’s “The Quiet Room” and Christopher Harman’s “Apple Pie and Sulphur.” “Apple Pie and Sulphur” is an interesting take on the supernatural dangers that lie just off the beaten path but perhaps has a scene break too many. Compared to the compact nightmares that surround it, however, the expertly developed relationships, hints, allusions, and unstated dread lurking in “The Quiet Room” build to a satisfying crescendo.

One of Mr. Kelly’s great strengths in editing S&TT is his ability to curate a broad group of voices. Here, the richness of perspectives – crossing genders, ages, social backgrounds, familial relationships – is impressive. If anything, however, even more variety in future volumes would be welcome, since a noticeable number of these stories have almost stereotypically “English” settings.

Overall, S&TT 6 is very highly recommended for fans of literate dark fiction. The stories are universally well-done by authors at the top of their game, but personal recommendations include “Onanon,” “The Quiet Room,” “The Space Between,” and “Writings Found in a Red Notebook.”