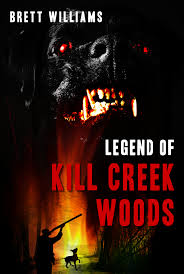 Following the losses of his last two living children who were attacked by what their father thought were wolves, the man focuses his attention on his dog, a female ready to give birth. He breeds her for money, and was waiting for her to drop her litter.

On the night she goes into labor, the man is visited by something he can’t explain, and can only see its eyes glowing in the light of his lantern. He is able to run it off, but only for a while. As the pups grow, the man is visited more and more often by this entity. He knows it will eventually kill him if he’s unable to figure out what it is and stop it.

He’s finally able to track the creature to its lair, and realizes he’s up against something evil and not of this world. And it’s up to him to stop it and make sure nobody else is killed.

The Legend of Kill Creek Woods kept me riveted from the very beginning. The reader never learns the man’s name, but the character is still able to elicit sympathy and understanding. While reading, I thought this was going to be a werewolf story, but was pleasantly surprised at what was really going on.

I’ve read many stories by Brett Williams, and have never been disappointed. The Legend of Kill Creek Woods is no exception. Fast-paced and suspenseful, you will root for the man and his beloved dogs to triumph against the creature that has taken up residence in their woods.