How I Started the Apocalypse, Book Two: The Hunger War – Book Review 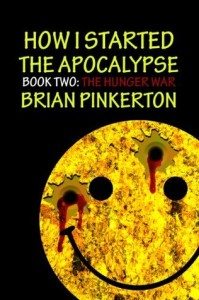 How I Started the Apocalypse, Book Two: The Hunger War

I read and reviewed Book One of this series a little over a year ago. I enjoyed the story very much, so I was pleased to give Book Two a read.

The story is told from the point-of-view of Chaz Singleton, a man turned zombie by no choice of his own. Unlike other zombies, Chaz is aware of the situation and wants to find the man who put him in this horrific situation. He tries to fight his urges to consume human flesh, but can’t; however, he tries to eat only those who he thinks are a detriment to society.

Unfortunately, in an effort to find the doctor in charge of the experiment, he started the zombie plague, first causing an outbreak in Pittsburgh, and then infecting much of New York City. Once Chaz uploads a video confession to the Internet, he becomes hunted by the military. His son tries to help him, but is kidnapped by the doctor as he attempts to flee the city.

Chaz begins to realize he has command over his fellow zombies. They can’t talk, but they understand him and obey him. He is also joined by a woman, Dolores, who is in the same predicament. Together, they organize the zombies into an army to fight against the soldiers trying to eradicate the zombies and their plague from New York City.

I enjoyed Book Two as much as Book One. I was actually disappointed to reach the end because I didn’t know there is going to be a Book Three, and I was left hanging. This was a fun read, and it was the first time I ever encountered zombie sex. Some things are better left to the imagination.

Gory and action-packed, The Hunger War is also funny and touching. One can’t help but feel for Chaz and cheer him on in his efforts. Brian Pinkerton has managed to make a sympathetic zombie, impressive in a popular sub-genre where they are an abomination.

I can’t wait until Book Three.