Today’s special guest is none other than the word-slingin’, guitar-stringin’ Josh Malerman. His debut novel Bird Box (ECCO/HarperCollins 2014) has been getting well-deserved accolades from review outlets (like, say, Publishers Weekly) and word-of-mouth alike.  Josh was good enough to discuss the terror of Infinity with us and how many novels he wrote before his “first” (hint: more than one, less than Infinity). 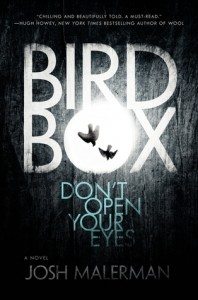 Hellnotes:  First off, thanks for joining us.  Bird Box has been very well-received and it’s always exciting to read such a strong debut.  Still, for those readers who haven’t yet heard of it, how would you describe Bird Box?

Josh Malerman:  I think of Bird Box as a very small story, a neighborhood horror, in which Infinity comes to town, a concept that will drive men mad, and we the readers get to watch that happen. I think, “What would I do if Infinity were on the front porch? I’ve heard that I’d go mad if I tried to fathom it!” Well, we’ve got blindfolds. That’s a start. What else? And a bigger question, if Infinity was on my front porch… would I be able to resist the temptation to look at it?

HL:  On that note, although Bird Box is your first novel, it’s remarkably self-assured.  Do you have a writing background?

JM:  By the time Bird Box was picked up by ECCO/HarperCollins I’d written fourteen or fifteen novels. And in the time since then, I’ve written another six. I’m not sure why I never shopped the books, it was certainly not because writing was only a “hobby,” and I suppose it had something to do with being in a great band, touring America on repeat, experiencing a different city every night, playing songs, writing books in the van between cities by day. I just never saw the stack of rough drafts as something I had to sell. I loved them and I still do and they were, for me, the purest of endeavors; art for no concrete reason. But an amazing series of events led to Bird Box landing in the right hands, and from there a team was assembled, the book shopped, and here we are. So, yes, I do have a writing background. A big one. But that’s just it… a writing background. And a reading background. I didn’t go to school for it and I didn’t spend my years trying to shop the first book I wrote. The stack of rough drafts kept growing and I couldn’t have been happier. Well, I thought I couldn’t have been happier. I daresay I’m happier now… having her out there… thinking that she might actually be scaring someone.

HL:  The bifurcated narrative lines give Bird Box its propulsive momentum.  One thread recounts Malorie’s past, counting down to an inevitable tragedy hinted at in the first chapter, while the other thread literally moves Malorie and her children down the river into the unknown.  Interestingly, both of these are told in the present tense.  How did you come up with this structure?  Did you ever consider other temporal arrangements?

JM:  The rough draft is a real dream-fuck. No indentations. No chapter breaks. No quotation marks. And the entire thing is in italics. Imagine a cubist-nightmare. I wrote it in a fury, 26 days, 4,300 words a day. Didn’t want the reader to be sure who was talking, who was thinking, who was where. A foggy nightmare. And I liked the idea that you had to take a second to figure out if you were still in the present or the past. For this, both threads were written in the present tense. Once I started breaking her up into chapters, I decided to leave it that way because it felt like the story was continuing, though it wasn’t. What was continuing was how much we knew about the housemates and what became of them. So, in a way, that’s the story beneath the story, and it’s presented linearly, snippets, through a sneaky past/present.

HL:  The novel has a very cinematic feel, although there are large stretches where the characters are blindfolded and have to rely on their other senses.  What were your inspirations in the novel as a whole, but also specifically in the choice to focus so heavily on non-visual experiences? 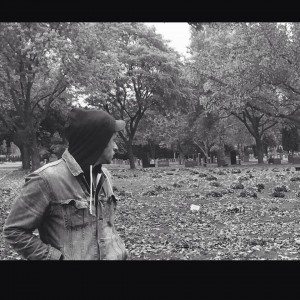 JM:  I don’t have a great answer for this one. It just felt scary to me. Man vs. Infinity. I remember back when I was ten years old, sitting in the hallway of our home as the family was getting ready for some kind of night out. My brothers were passing by, my parents were talking, planning, and I was sitting on the carpet, quietly freaking out because I’d heard, the day before, that Man is incapable of understanding where Time began or Space ends. I was overwhelmed with the idea and not a little curious and so I tried to fathom those coordinates (exist though they may not.) Thing is, what I was scared of was actually fathoming it. Like, what would happen to my mind if I did? Well, the episode washed over me and I got ready with the rest of the family, but I never forgot that feeling. Infinity was a monster to me, something cruel enough to drive a man insane. And so, as a man myself, and one who is always looking to write a book, I thought of that afternoon/evening and started juggling pieces from there. It just so happens that this particular “monster” could really mess up a man who viewed it. And so, I embarked on a story where the characters were primarily blindfolded throughout.

HL:  Malorie is certainly a strong female lead, but without being “kick-ass.”  Many times in horror, there seems to be a tendency to wrongfully conflate the two – as if the only way to be “strong” is to punch a monster.  How did you develop Malorie, and did you have a particular inspiration for her?

JM:  I thought of that very thing many times while writing her. “She doesn’t need to go from wallflower to ninja,” I kept telling myself. “A much smaller gradation is probably more fun.” Whatever she went through, in a character sense, happened naturally enough, and sometimes I feel like I hardly nudged her at all. I think she’s the character I relate to the most. Meaning, she’s the most like me. I imagine I’d be just as scared and just as impatient, too, bringing me to finally take the river with the two kids. And because I’m neither a wallflower or a ninja, and because most of our dynamics aren’t quite as disparaging as we probably think they are, Malorie’s “transformation” comes out pretty clean in the end. I didn’t have a specific woman in mind when I wrote her. But I definitely saw her, every thing about her.

HL:  As the clock ticks closer and closer to that the horrible event in the house, Malorie’s pregnancy progresses – making her less and less physically capable of responding.  Yet, at the same time, we see her become more and more assertive.  How did you decide on this approach and what are your thoughts on Malorie’s development?

JM:  I think Tom had something to do with her taking some control of the situation but I also think there was some luck involved. Good timing on the birth, I’d say! And, really, the rest of it, going to the bar, getting the amplifiers, taking the river… that was all born out of impatience and fear. How long could you sit still in a house where this or that happened before you’d think you had to get the hell out of there? So you say assertive, but I say impatient. And I guess they’re the same in the end.

HL:  I’d never heard of a Bird Box before, but has definite practical (and metaphorical) use in the novel.  Is this a real thing?  At what point did you begin to structure the motif around it?

JM:  When I wrote Bird Box I had five finches. I didn’t like caging them so I left their cage open and they’d fly around the apartment freely all day but especially in the morning, when I wrote. I was fairly far into the book when I chance glanced at the box they came in, the box I carried them home in, and I thought, “That’s not so different than the house and the housemates.” It kinda lit up in my mind and I held onto it, titled the book, and felt good about it.

HL:  Were you ever tempted to explain the creatures and the madness (maybe in an earlier draft)?

JM:  I think they are explained!

HL:  You’re also a long-time musician, currently playing with your band The High Strung. Do find that your creative process in writing is influenced by your musical experience, or vice versa?

JM:  Yes, in the most fundamental of ways, yes. Meaning: they both take time and energy and love and work and doing it and so after you finish writing an album you feel like you’ve got the muscle to write a book and vice versa. It’s hard, though, I’ll say, to leave one sphere and enter another. You’re playing guitar for a while, working on songs and BOOM you’re sitting behind a typewriter. I’ve gotten good at it though. The real brain teaser is going to be some kind of combination. (which, I’m just seeing, is your next question)

HL:  What are you working on next?   Maybe a Bird Box rock opera?

JM:  Book 2 for HarperCollins. I’ve got a title for it but I’m not married to it (the title) yet. It’s not a sequel. Too many ideas for sequels.

Josh Malerman is the author of Bird Box and Ghastle and Yule (Kindle Single) and lives in Ferndale, Michigan with his fiancée Allison Laakko.

No website yet, but he says he’s on it.  Promise.