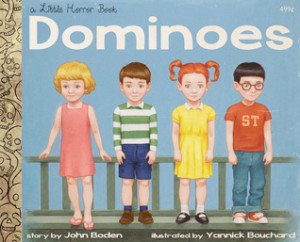 This slim 48-page volume parodies the style of the classic Little Golden Books® that anyone who has had a childhood or been a parent knows far too well. How many time did I have to re-read the Saggy Baggy Elephant or Scuffy the Tugboat to my own kids? Impossible to count. These staid and realistic books with their strong sense of moral rectitude and earnest instruction have been a staple of American culture since the series entered print in 1942. Although more recent years have increased the diversity of themes and artistic styles, there has always been a signature look, and a distinct lack of whimsy or subversion. They are purely conventional, conservative and by the numbers, which is part of what makes this Little Horror Book from Shock Totem so effective.

Writer John Boden describes the piece as a having its origin in pieces of microflash fiction and experiments with structure. In a series of short vignettes, Boden gives us a fractured view of the apocalypse, including the day-to-day work of a soul-harvester, the breakdown of social order, and the mental and emotional collapse of everyday people confronted with a world in which the normal rules of the universe have suddenly come to a halt. The world is ending, but it does not appear to be the glorious Rapture that some fervently believe in. Boden provides glimpses as it all falls apart, piece by piece.

It is an experimental work, quite unlike anything I’ve seen before. The prose is lyrical and the imagery surreal. And despite the conceit that this is a children book, it is clearly far too explicit and disturbing for actual children. Dominoes provides the adult horror fan a unique experience that is designed to play with the reader’s expectations in distressing ways. The vision of the apocalypse within is horrifying, and the close focus on individual events instead of the big picture makes the book all the more disorienting and creepy. The imagery is specific and powerful, hinting at how truly terrible the world at large must be just outside our view.

In keeping with the theme, the book is illustrated by Yannick Bouchard, who has created a series of drawings that might not be out of place in a classic children’s picture book if it weren’t for the content. They are effective, both amplifying and disrupting the text. Sometimes the effect is explicitly graphic, and at others, far more subtle. For example, you might not notice the thin strands of line around the necks of the children on the cover at first. Realizing they are there is delicious in a darkly perverse way.

Books like Dominoes are a strong argument for supporting smaller publishing houses. A major house would not have taken a chance on a piece like this: too unusual, too disturbing. Boden has created a transgressive, disturbing, nasty little piece of art. It is a breath of fresh and tainted air in an otherwise conventional marketplace. Recommended.