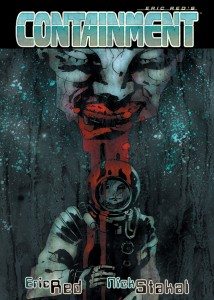 Graphic novels had never much interested me, until I got my hands on First Comics, Inc.’s version of Michael Moorcock’s Elric of Melniboné in 1986. Now, having devoured Eric Red’s horrifically mesmerizing Containment, I see just how far graphic novels can be taken when produced by author/artist pairings such as Red (screenwriter for The Hitcher, Near Dark, and others) and Nick Stakal (Hyde, Silent Hill).

In 2025 a NASA vessel—the Explorer—200 million miles from Earth, and on year 26 of a 32-year mission, is in big-time trouble. A problem with the life-support system forces the 12 crew members to be “thawed” from hypersleep. Commander Stark soon discovers that not all of them have emerged from the pods in the same condition they entered 26 years ago. She and Trumbo, Tulsa, Langtry, and Hobbs find themselves in a dire situation, perhaps best captured by this poetic maxim: “…In space, nobody knows you’re dead.”

After several brutal encounters, the crew figure their violent mates have been rendered so by cryogenic fluid tainting their blood. And that’s not the only threat. Explorer has been damaged, and needs repair quickly, or else…well….

Red’s screenwriting experience obviously carries over seamlessly into this format, with Stakal’s detailed—yet somehow also impressionistic—illustrations the perfect match. The echoes of Alien and Aliens soon faded as I was yanked into this very dark, fast-moving tale—barely time to catch my breath between scenes. That Red and Stakal are able to sustain this pace (while showing the crew’s frantic discussions about what to do) is impressive.

Hats off to Paul Fry’s SST Publications for taking on Containment, and doing a visually striking job.