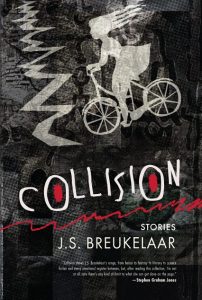 The stories in J.S. Breukelaar’s collection Collision are an unapologetically surreal group, but nonetheless undeniably human. They’ll smile as they ask you to accompany them into that penumbra just beyond the comfortable borders of horror, sci-fi, fantasy, realism, or any other comfortable boundary, and you’ll agree. A few will return you seemingly unscathed, your hands washed and intact, but unable to escape the feeling that something has changed. Other stories, though, slip their razor blade under your skin and you won’t get them out without digging in further. Either way, Breukelaar’s Collision will leave a mark on you, and that’s perfectly fine.

The collection’s title asks: “What is the collision?” The answer, of course, is that it’s every story here. These are stories where familiar genre conventions exist only as points on a continuum that is constantly blurring past the reader like mile-markers on a road taken at full speed. The collision, then, is each story’s moment where the windshield of expectations breaks against the narrative’s face. It’s that impact where damage seems inevitable but just beyond is a flight free of our prior constraints. The collision is the way the experiences Breukelaar has set into motion reach their moments of explosive potential and what happens next is … well, you’ll have to see.

Collision’s stories run the gamut of speculative genres and Breukelaar’s voice is a chameleonic wonder which facilitates her explorations. Always lively and precise, the most immediately accessible of her stories operates in a literary-cum-speculative upper register akin to George Saunders and Karen Russell. Works like “Union Falls,” “Ava Rune,” “Lion Man,” “Fixed,” “Fairytale,” and “War Wounds” chart a course through an existence where the unreal lives alongside and encircles an “ordinary,” but no less strange, world. The sharp details, well-crafted dialogue, and deep personal connections build upon each other to create a synesthetic emotional resonance that can’t be directly traced to any single element. It is readily apparent that the speculative isn’t a crutch or a fallback for Breukelaar, but rather a tool to examine and evoke the human condition from hidden angles.

Other stories lean harder into their speculative origins, although never to the detriment of the human element. “Raining Street” starts in a world that you might confuse for ours if you squint, but would never make that mistake by the end when the main character’s emotional outcome is literalized. “Rogues Bay 3013” and “The Box” are classically science fiction in their premises, although their real preoccupation is less with the dangers of technology than with the damage humans find a way to do to each other despite their best intentions. The title story, “Collision,” finds alternate realities and antimatter forced to the tipping point, but grounds them in a story about responsibility, choice, and sacrifice.

While the Weird is a milieu that operates only on the periphery of understanding, a few of the stories in Collision trade the amorphous strange for a concrete coding more akin to The Twilight Zone or Black Mirror. In particular, stories like “The Box,” “Glow,” and “Like Ripples on a Blank Shore” drop the dream-logic obfuscation of the other stories for a closer overlay of the speculative element over more readily identifiable concerns of relationships, politics, and identity. Although more direct in the metaphorical aim than the other stories, they retain the perfectly observed quotidian moments that ground this collection. While they eschew an oblique universality, they more than make up for it with timeliness and topical insight.

Although the title story “Collision” captures the overall tenor of the works as a whole with its tensions between the chaos and obliteration, the longest story in the collection is the novelette “Like Ripples on a Blank Shore.” “Ripples” is the kind of story that requires its full length to breathe as it develops a world where almost-human-but-not Hosts have arrived in the world even as Celia finds herself drifting further away. Like “Glow,” it overlays a speculative element over a closer concern. I could spoil it for you, but I won’t. I’ll just say “Fuck Aristotle,” and you’ll know it when you get there. It’s a collapsing of possibilities; it’s a choice at the end of the collision.

Rounding out the package, Collision has its share of welcome embellishments. The stories are spotlit by illustrator Keith Rosson’s black and white images, often plucking one evocative moment from the text and driving like a pin into the heart of it. In addition, Breukelaar provides brief story notes after each tale. These glimpses into the process of her writing and the germs of inspiration have the effect of revealing without exposing, and make a delightful addition.

Collision is a wonderful collection of complex tales that cross genres in ways that are never fully expected at the beginning but always fully realized by the end. The boundaries between different styles are as porous as the boundaries between worlds, but each aspect is precisely organized and elevated by Breukelaar’s versatile and vital techniques. It’s no stretch to say there’s something for everyone here, but we can go further and say there’s something for every version of everyone, even as they shift and change.