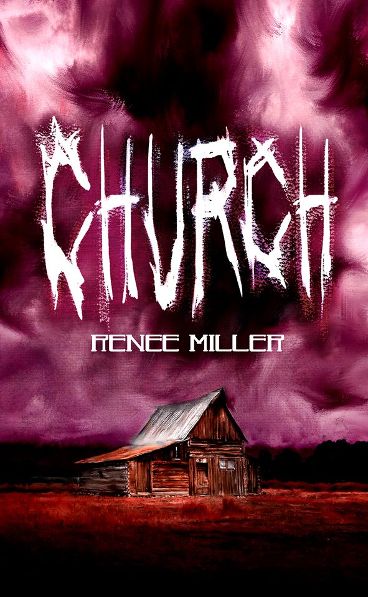 Renee Miller is badass. If you like your horror to have the same emotional impact as being hit over the head with a lump hammer then slowly and agonisingly dismembered while you’re still alive, only with more kinky sex and toilet humour, you could do a lot worse than try one of her books. She’s very productive too, so you’d better keep up. I could be mistaken, but I’m pretty sure Church (out now from Unnerving) is her fourth release this year. Or it might be five. Anyway, Ray is a devout Christian who falls in love with a woman who, er, isn’t. Instead, she belongs to one of those weird religious cults which follows a god called Zabir. Determined to save her soul, Ray joins said weird religious cult, inadvertently signing up for a process that will not only threaten his health, sanity, and physical well-being, but could even strip him of everything that makes him human.

Beyond the things that make us human, what’s left? Some scary shit, that’s what.

When discussing the inspiration behind Church on her blog, Miller says, “I’m fascinated by religion and understanding the weird shit people believe in. I think that everyone needs to have faith in something, be it a person, themselves, or some deity far, far away, whom they’ve never seen, spoken to, or had any tangible proof of existence. I think faith is good. It makes you hopeful, and (usually) encourages us to be better. Faith has inspired people to do amazing things, but let’s be honest, it’s also inspired people to do some pretty horrific shit too.”

Are you captivated yet? This novella is an unforgiving, breathless read that will grab you by the scruff of the neck on the very first page and not let up until it’s had its wicked way with you. At its core, it is a twisted love story, riffing off the eternal question of how far would a man go to ‘save’ the gal he intends to spend his life with. However, that honourable conundrum is soon buried beneath lashings of sado-masochism, blood and gore, mostly dished out by Darius, the psychotic ego maniacal cult leader. Will good ultimately triumph over evil? Or will Ray’s flickering spark of true faith be brutally extinguished? You’ll have to read Church to find out.

C.M. Saunders is a freelance journalist and editor. His fiction and non-fiction has appeared in over 60 magazines, ezines and anthologies worldwide, including Loaded, Record Collector, Fantastic Horror, Trigger Warning, Gore, Liquid Imagination, and The Literary Hatchet. His books have been both traditionally and independently published, the most recent being Apartment 14F: An Oriental Ghost Story (Uncut) and Human Waste, both of which are available now from Deviant Dolls Publications. He is represented by Media Bitch literary agency.