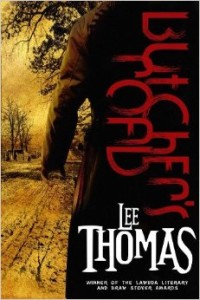 One of the first things I do when reviewing a book is to read the back cover—blurbs and all. I was intrigued by the synopsis of Butcher’s Road—a washed up wrestler now working for the mafia in Prohibition Era Chicago gets caught between two rival mobs and a mysterious world of metallic implements, any of which could kill him—drew me in. But I was concerned with the blurb from Publisher’s Weekly that called Lee Thomas’s latest release “…intensely masculine.”

I needn’t have worried. Thomas created characters that vicious and cruel, greedy and evil, but they are handled with a sure hand that makes them believable, The violence and the language are all what you’d expect from a gangster movie (of which I’ve watched many), but the words Thomas chooses pack a punch not unlike the ones his protagonist Butch “The Butcher” Cardinal throws in the story.

Thomas uses descriptions in a creative way, choosing non-clichéd language to bring his characters to life. My sympathies changed several times in this book. Characters morphed—some grew as people, others simply revealed their true nature. The magic system in Butcher’s Road was fresh, reminding me of a mixture of alchemy, steampunk, and carnival sleight of hand.

Occasionally I came across a story and think, “How did I not see this happening in Chapter One?” This is one of those books. Nuanced, well-plotted and paced, full of flawed people that function in a corrupt society, fully convinced of the rightness of their actions.

Thomas also addresses homosexuality in this story, a topic I don’t regularly come across in novels of historical fiction set in 1930s Chicago. The story moves to New Orleans, where Cardinal meets several people of various ethnicities. Each of these situations Thomas handles with care, allowing the reader to view the situations through Butch’s eyes and defying stereotypes of the period and those currently held.

Butcher’s Road is tough and tender, with plenty of fight, sympathy and harsh beauty.  If that is what Publisher’s Weekly considers masculine writing, I agree with their description.

I, however, won’t attempt to put a category on Butchers Road. But as I read the last line, I was sorry to see it end.