Book Review: YOUR TURN TO SUFFER 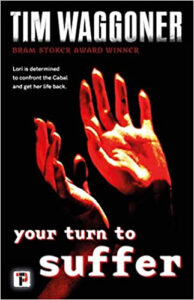 Bram Stoker Award® winner Tim Waggoner’s latest release, entitled YOUR TURN TO SUFFER, is a work of classic, visceral horror that is certain to induce nightmares. I was sold right from the start when I noticed he dedicated this novel to the legendary, bizarre film director, David Lynch. In fact, I would love to see Lynch do a film version of this creepy, dark novel.

Lori Palumbo is merely shopping in her neighborhood grocery store when she comes across another shopper, an odd-looking old woman dressed like a hag or gypsy, who points an accusing finger at her and speaks the word: “Confess.” Lori cannot get away fast enough, but the creepy old woman definitely made an impression and apparently cursed her in some way, as this begins a series of bizarre events that will attack her during the day and even invade her nightmares.

This first incident occurs as she is leaving the grocery store and narrowly misses getting struck by a vehicle, being driven wildly, that ends up smashing into other cars in the parking lot. When Lori approaches the vehicle that caused the wreck, the buckled-in driver blurts out a phrase in a fit of horror: “Her…eyes…like a…goat’s.” Lori immediately realizes the man is describing the same woman she had just encountered, and now knows it was not a daydream but the start of something very real and evil.

At another point in the novel, Lori is picked up by a car ride service driver, who locks her in and informs her that she is in the Nightway and he is taking her to Vermilion Tower, where his associates want to have a chat with her. Upon arrival, Lori is met by a cultish group of robed figures referring to themselves as the Cabal. They demand the same thing the old woman in the grocery store did: for Lori to confess something she is not aware of.

Lori escapes, but the nightmare is far from over. She later finds scrawled across the mirror over her sink: You know what you did. Confess and atone – or suffer. The Cabal. Lori feels truly trapped as she knows this Cabal is beyond the reaches of mere law enforcement and she has no idea how to stop them from continuing to threaten her and everyone around her.

What makes YOUR TURN TO SUFFER so effective is that any reader can see themselves in Lori Palumbo’s position and that heightens both the chills and the frustration. The novel devolves into something truly horrific and all you can do is sit back and try and enjoy the ride.