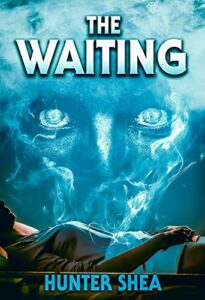 Yonkers, NY resident Hunter Shea loves horror. He is not only a prolific author in the genre, but also hosts a horror podcast and refers to himself as a full-fledged horror-meister. One of his most recent releases, and he seems to put out horror novels/ebooks in the fashion of James Patterson, is entitled THE WAITING.

Shea indicates that his novel CREATURE could not have existed without this novella, THE WAITING. For he and his wife, each story hit awfully close to home for them. Newlywed Cassandra Pagano is unfortunately clinging to life, her body kept alive by a series of machines that surround her bed. It is in this state where she is visited by images and ghosts of her past. She is also aware of something else that is haunting her—the dead.

The novel plays out like a stream-of-consciousness from Cassandra. She will have images of past events, like her wedding, which will suddenly be impacted by something physical that is going on in her body during its present state. Sometimes she will get feelings like there are explosions within her body, and she will silently cry out for her husband, Brian.

Dr. Stepka keeps telling Brian that Cassandra is strong, but that she is not sure what else she can do for her other than wait. I enjoyed the depiction of Brian sitting at Cassandra’s bedside reading a novel from the late, great Jack Ketchum. However, Cassandra’s coma-dream visions start to feature a young boy, of whom she is afraid. She wants to understand who he is and what he wants from her.

Brian begins to experience his own visions of a strange boy popping up in his life at unexpected moments, and this fills him with feelings of creeping dread. When someone else tells Brian they saw the image of a boy, he feels both terrified and validated about his own sightings. If only Brian or Cassandra could decipher the quiet whisperings of the boy. Things really take a weird turn when Brian pulls out pieces of an incredibly old newspaper in the pocket of one of his coats. It is within this newspaper from 1959 that he reads an article about a Bronx family where a nine-year-old boy died of pneumonia. That was not long after he accidently killed his own mother by disconnecting her from her life support machine.

Could this be the young boy they are seeing, and does he have intentions to repeat history with Cassandra and her life support equipment? You’ll have to read on for yourselves to discover those answers. Just remember one important thing, this is a Hunter Shea novel and that means things may not end in the way you might expect!