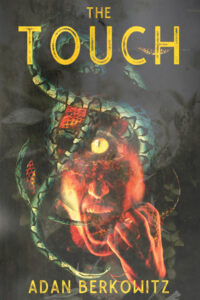 The Touch is the debut novel by Adan Berkowitz, and it contains elements of horror and the supernatural. The title refers to a predatory psychic power that is akin to a psychic vampire in the sense that victims’ energy is drained by an entity that is consuming stamina. While touching the victims, the predator has access to the victims’ memories.

Jessica Kolb realized she had the power when she accidentally killed her brother, Sam. Ever since, she has been doing her damnedest to imprison the power inside of her for the protection of others. Even though she has not been feeding her power, she is able to sense it in another. She comes to believe that Dr. Claude Weissman/Dr. Fred Glass also has the touch, and that he has not been acting as benevolently as she has.

Jessica is correct: Dr. Glass willingly seeks people to attack and drain. His favorite “meal” is children. Jessica makes it her duty to learn more about Dr. Glass, which is when she meets Chris Marquette who is the father of one of Dr. Glass’ victims. Together, they determine to put Dr. Glass out of business permanently.

While the battle of good and evil creates a sizeable amount of conflict, there is an extra addition to the action in the character of Freyja. Freyja also has the touch, and she has spent several lifetimes wandering the earth using her powers in both understandable and nefarious ways. The plot turns and twists until the powerful trinity is lined up to collide.

The plot is quickly paced, and the secondary characters are interesting in their own right. There is a great plot twist at the end that added an interesting lens to the events that had previously transpired. I found myself enjoying the book more and more as I read, and I recommend it for fans of the supernatural.