Book Review: THE SHAPE OF DARKNESS 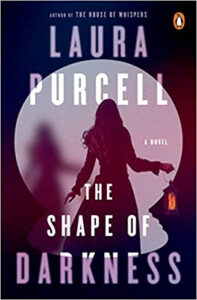 British author Laura Purcell has quickly made a name for herself as a master of Gothic horror, and her latest release THE SHAPE OF DARKNESS continues that effort. Agnes is a silhouette artist during the Victorian Era in the British town of Bath. Her apparently innocent pieces of art, and those whom they depict, will soon be caught up in a supernatural plot that will bring terror to the town and make Agnes a person of interest in the horrific crimes that occur.

The novel kicks off immediately with Agnes being visited by a Sergeant Redymayne who informs her that the last customer who sat for one of her silhouette glass portraits, a Mr. Boyle, was found savagely murdered—his body lying in the street, with his bashed in by what appeared to be a mallet.

Agnes is horrified and fears how this news may impact her business. She is raising her orphaned nephew after the death of her sister, and taking care of her elderly mother. Agnes herself is recovering from a serious illness and does not want to relapse as a result of this recent shock. The action then switches to the other protagonist in the novel, a young teen girl named Pearl who has true ESP powers and is being exploited by her greedy mother who is conducting seances under the name the White Sylph, while all the time utilizing Pearl’s powers for profit.

Another death happens in the area, this time the drowning of a sailor. Pearl can connect with the dark entity that is behind these murders, and it frightens her to no end. Her mother shrugs this off while keeping Pearl hidden in their home. It is inevitable that Agnes and Pearl will eventually meet up, as they are both tied to the dark force that is behind the string of endless murders in Bath. However, their combined efforts may not be enough to thwart this evil.

THE SHAPE OF DARKNESS is a quick and terrific read full of unpredictable plot twists that includes one huge twist I never saw coming. Laura Purcell has firmly solidified her reputation in the Gothic horror genre, and I eagerly await her next work.