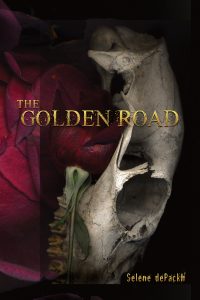 While Selene dePackh was new to me as an author, I very much admire what she’s done here. The novella’s premise is a pretty simple one: we have two older women, Stephanie and Sylvie—deeply close friends—who live in rural Maine. Stephanie discovers a badly injured wolf-dog hybrid and brings it to Sylvie, who is a gifted healer. Several complications emerge immediately: the dog is potentially extremely violent, and probably not even suitable to keep as a pet; Stephanie is being stalked by an ex-husband who is insane, twisted, and increasingly desperate; and Sylvie is barely clinging to sanity via her spiritual practices. This is a recipe for a titanic, suspenseful, highly satisfying clash, and The Golden Road doesn’t disappoint.

A story like this hinges on the depth of the characterization for the central characters. I’m delighted to report that dePackh doesn’t disappoint—her characterization of Stephanie and Sylvie was supremely good. These are women who come off as fully realized, and deeply troubled, people. Everyone in The Golden Road, human and animal alike, is damaged. There’s nothing better than reading about how damaged individuals cope with stress, trauma, and danger. I would also add that The Golden Road offers a fascinating and detailed examination of mental illness, individual spiritual practices, and the uses of spirituality for dealing with trauma and mental illness. This can be dreary or hopelessly vague stuff if done poorly, but it works well here. We’ve also got a genuine sense of menace throughout. Stephanie’s stalker ex who sets things in motion is chilling, as is his use of surveillance. I’m increasingly coming to find the use of newer technologies for illicit surveillance and nefarious purposes deeply creepy, so it was very nice—and by “nice” I mean extremely creepy—to see how that plays out in this story.

I thoroughly enjoyed The Golden Road and was on tenterhooks the entire I was reading it. It’s a very taut tale of suspense and tension throughout that lends itself to binge-reading. Recommended.