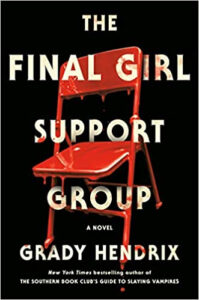 Grady Hendrix understands what the horror genre is all about. Whether he is focusing on long-lost soft-cover titles in his nonfiction work PAPERBACKS FROM HELL or exploring modern vampirism in the American South with his recent release, THE SOUTHERN BOOK CLUB’S GUIDE TO SLAYING VAMPIRES, Grady always knows how to entertain within the horror realm.

Now, his latest release may be his most serious work to date, and one filled with plenty of scares and breath-taking suspense right up to the final page in—THE FINAL GIRL SUPPORT GROUP. For those not in the know, the term ‘Final Girl’ refers to the surviving female of an infamous killing spree. We first learned this term with the myriad of slasher films that there have been over the past several decades—but Grady Hendrix takes the concept a step further. He imagines a discussion group, sort of like an addiction meeting, but featuring only women who were ‘final girls’.

The protagonist and narrator of this story is Lynnette Tarkington, herself a final girl. The group’s discussion leader is Dr. Carol Elliott, a criminal psychologist. Lynnette lives each day like she is going to die; such is the life of a final girl and the sick people out there who may try to kill her. The opening day in this novel is different, as Lynnette is watching on CNN with great interest a repeat killing spree taking place at the infamous Red Lake. She sees the photo of the only survivor, Stephanie, and recognizes that there is another final girl now for their group.

The novel jumps around in the timeline of both the actual events that made each of these final girls as well as things happening in the world around them. We also get to peek inside the discussion sessions as Dr. Carol takes intricate notes of everything and has files on all the final girls in her group. Their worlds are all rocked when one member of their group, Adrienne Butler, is viciously murdered. They all realize that her monster finally got her.

Lynnette is quick to see that there might be someone out there looking to pick off the final girls one by one, and it is important that they all go into serious defensive mode. It turns out that Lynnette has been writing her own book about her experiences and that of the group, and whoever is behind the ‘hunting’ of these final girls breaks into her computer and releases her ‘book’ to the public. This essentially destroys the Support Group meetings as her feelings about Dr. Carol are now public domain and Lynnette believes Dr. Carol may in some way be working with whoever is seeking to kill them all.

Dr. Carol’s private notes indicate that she believes Lynnette may be hiding something, and readers will now have to face the fact that we may have an unreliable narrator to deal with. THE FINAL GIRL SUPPORT GROUP is a wild ride of a novel where you will find yourself rooting out loud for these young women who are suddenly targets. A highlight for me was when Lynnette and some of the others come across a Murderabelia Museum, which shows how their tragedies have been fully marketed to the public. One great thought from this masterful novel is: “Murder is man’s attempt to steal birth from women. We make children, they create death. It’s the way it’s always been.” Grady Hendrix is the perfect guide for this unique horror novel, and it’s great fun from start to finish.