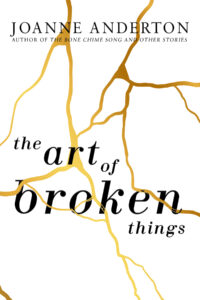 As I’ve noted before, single-author story collections with eclectic themes are always a big risk for the reader—all too often they’re filled with more misses than hits. I’m delighted to say that that’s not the case in Joanne Anderton’s collection The Art of Broken Things, which is comprised of a dozen short stories spread across several genres and a lengthy post-apocalyptic novella (“I Almost Went to the Library Last Night”) that closes out the collection. Anderton’s writing and choice of subjects are hauntingly beautiful, filled with loss and grief and brokenness, and attempts to repair that damage in powerfully inventive settings. Here, for example, we’ve got stories about lonely robots tasked with finding the remains of a deceased child after an environmental catastrophe, a woman who becomes haunted by the victims of brushfires in the Australian wilderness that surrounds her home, and a group of young scavengers just trying to survive a post-apocalyptic city while being hunted by autonomous robots that threaten to invade and transform their victims’ bodies, among many others.

“Wreck Diving” opens the collection and I think is an excellent representative of Anderton’s work showcasing exactly what I loved about her writing. On the surface, this could be a story about many married couples. Forced to live apart by professional obligations, they slowly grow apart emotionally until one day their relationship reaches an inflection point: is their love strong enough to keep them together, or have they simply grown too far apart to try to salvage the relationship? What’s unique here is that this particular couple reaches their potential breaking point while they are tourists imperiled during an exploration tour of a wrecked spacecraft.

Anderton is an Australian who seems to have spent a considerable amount of time in Japan, and fortunately she’s brought back some wonderful inspiration for several of her stories from her experiences as a Westerner attempting to navigate Japanese culture (and folklore). “Warabi Mochi” is a delightful story about an Australian woman (someone much like Anderton herself?) teaching English in Japan who struggles to forge connections with her colleagues while also getting deeply involved with supernatural beings of Japanese folklore. Both eerie and quaint. Likewise, in “Ten Thousand Gates,” another western woman encounters some unique aspects of Japanese culture, including torii gates and stray cats who just might be more than they seem, while memorializing her dead lover.

While I love Anderton’s quieter, cozier stories that explore unique corners of folklore, I think she may truly be in her element when writing about the aftermath of disasters, in either postapocalyptic settings or dystopias. Let me give you a taste of some of my favorites:

“Traces” is a wonderful postapocalyptic story about a robot tasked with scavenging in the rubble for a particular strand of DNA in an area that is cut off from the rest of the world. Heartbreaking and poignant.

In “Bullets,” a woman lives alone on a farm in the Australian outback in the aftermath of the mammoth wildfires that destroyed so much of the landscape and killed so many animals. She begins encountering human(oids) who were once animals but who are now tied to the not-quite-dead bodies of animals caught in the wildfires. Creepy and wonderful.

“The Last Tiger” is an amazing, fully realized dystopia in which there seem to be no real animals left. A man purchases the last tiger, which seems to be more machine than beast, kept alive by its cybernetic implants. The man becomes obsessed with it and is ultimately consumed by his obsession.

There are many more fine stories I could highlight here, but this list is certainly suggestive of the breadth and depth of Joanne Anderton’s imagination. She’s a strong writer, and I very much enjoyed her eclectic explorations of loss and loneliness and people seeking empathy and connection despite the trying circumstances in which they find themselves. Wonderful settings and characters throughout. Recommended.