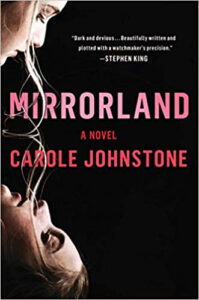 The debut novel from author Carole Johnstone begins with quotes from two of my all-time favorite literary works—THE COUNT OF MONTE CRISTO by Alexandre Dumas and RITA HAYWORTH AND THE SHAWSHANK REDEMPTION by Stephen King. I knew from the start that I was in for a treat!

The prologue is set in September 1998, where young twin sisters Cat and El are holding hands and wading out into the ocean together. Cat swears she feels El let go and disappear from her sight, and this moment she refers to as the day their second life began. The action switches to modern day, where Cat is now living far from her home in the U.K. where she and El grew up. We then experience Cat reading online about the disappearance from a sailboat and possible drowning of her sister Ellice. It is then that she decides it is time to go home and face not only this but also her and El’s past.

Upon returning to the home they grew up in, the home where El continues to live with her husband, Cat finds certain clues that could have only been left by her sister. She feels something whisper in her ear: There’s a monster in this house. Right after that she finds a card that just bears the word LEAVE. Cat is the only one who could understand what is going on, and to find the answers to the many clues she uncovers will require her returning to the place known as Mirrorland, a fantasy-place she and El created for themselves within this very house when they were children. A place that housed both secrets and horrors.

Future clues ask Cat not to involve El’s husband, whom Cat already does not fully trust. Yet she is now sharing this house with him while the search continues for El or her body, which makes for many uncomfortable and strange interactions. Another note informs Cat that YOU’LL DIE TOO, and she takes this warning to heart by not trusting anyone around her. She remembers that all rules set by Mirrorland had to be obeyed, and Cat and the reader are in for one wild ride.

MIRRORLAND is a dark journey into terror where it is difficult to determine what and who are real and what is just a creation of this bleak fantasy-world created by two creative and scared young girls. Carole Johnstone has a real winning debut on her hands, as this story continues to amaze with each passing chapter right through to the finale.