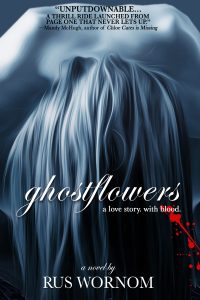 I would be remiss if I did not disclose something very important before diving into this review: I am not a fan of romance. AT ALL. Unless it is Gomez and Morticia, keep it away from me. That said, Ghostflowers was not as painful as I imagined it would be.

Ghostflowers tells the story of beautiful waitress, Summer, who is bored with her small-town life and dreaming of somewhere different and exciting. She has good friends and a dreamy boyfriend, but she has long suspected that she is somehow different from those around her. She is also routinely bullied by her mother, who she lives with, which only adds to her desire for independence. When a stranger on a motorcycle comes to town, Summer begins to find the pieces that have been missing from her life. Unfortunately, the stranger becomes the target of Sheriff Hicks who is relentless in his pursuit of anyone that does not fit his definition of a clean-cut American.

The good: there was a nice sense of nostalgia to the story. The author has a love for the characters, theme, and environment that is contagious. The environment is almost a complete character: Wornom had a very clear image of his setting, and he was able to convey it so well as to make it recognizable. The chapters are brief and have nice cliffhangers at the end to keep a reader engaged. The beast imagery was appealing and a bit unique for this type of monster story. Finally, the climax was satisfying. Wornom seems to be setting us up for the possibility of a sequel, but enough loose ends are tied up to make a reader feel content.

What I wasn’t thrilled about: while the type of monster is never named, we are made aware that we are dealing with a vampire. I am a vampire purist, so the liberties taken with the mythology didn’t sit right with me. Vampires should not be looking at their reflections, and in some scenes it was not clear if they were walking around during the day while sunlight burned them in other scenes. Sheriff Hicks was balls to the wall for the stranger at first sight; it would have been useful to have the stranger do something more suspicious from the onset and have a bit of a slow build to the intense hatred. I know that other reviewers really enjoyed the mention of songs interspersed with the action, but it distracted me. The same with mentions of movies and television shows. A few pop cultural references are enough to provide ambiance; most of the mentions added nothing nor did they come back to into play.

For the now adult “Twihards” who shipped Edward and Bella, this book is definitely for you. It is a better written, adult supernatural romance. The main characters are attractive and sensual, and they are caught up in an intense romance that many readers will find appealing.