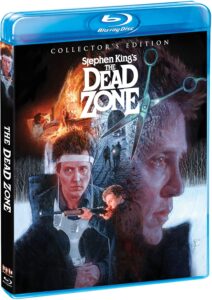 When it comes to psychics it’s hard to outdo Stephen King, author of Carrie, The Shining, Firestarter, Doctor Sleep, and more (including this one). To bolster that love of mind over matter, the makers of this movie got David (Scanners) Cronenberg to direct. The fact that both men are legit masters of horror was a nice bonus. Then you add the talent and insanity of Christopher Walken doing one of his most restrained, but still highly memorable and quotable performances. The end result was one of the most faithful adaptations of a King novel, with Cronenberg’s detached, nearly clinical style and with Walken doing some of his best acting work. So yeah, this movie is a classic, but is this new Blu-ray from Scream Factory worth a get? Well, watch out for milk trucks, don’t touch anyone, and let’s find out.

Walken plays John Smith (no, really), who is a mild-mannered school teacher who has a terrible auto accident one night and winds up in a coma for five years. He wakes up one day and soon discovers that he has the power to see events in a person’s past or future with just a touch. So begins his incredible adventures that include catching a serial killer, saving a young boy from drowning, and then possibly saving the world. It is in that last regard that this movie really goes for broke when John shakes hands with a wannabe senator, played to crazy perfection by Martin Sheen, and sees that in the future he will become president of the United States and start World War III. Armed with that knowledge, Johnny must ask himself how far is he willing to go to stop that future form happening.

Highlights to this film come in the form of Walken’s performance, first and foremost, but also a very human tale of an ordinary guy dealing with something extraordinary. His relationship with the woman he loved, but who had five years to get over him and move on while he did not, is appropriately heartbreaking. Cronenberg’s direction is on point; even if this feels like the least Cronenberg-like movie he ever made, the serial killer bit is nice and creepy with a Norman Bates kind of feel, and Martin Sheen makes for a great main bad guy. And yes, Christopher Walken’s delivery of the line, “The ice is gonna break!” is the stuff of legend.

Let’s get to the extras on this new Blu-ray release from Scream Factory. There are three audio commentaries on here. One is with Director of Photography Mark Irwin, another with author and film historian Steve Haberman and filmmaker Constantine Nasr, and the third is with another film historian, Michael Gingold. There is an isolated score with an introduction by film music critic Daniel Schweiger.  There is an interview with actress Brooke Adams, and then there are a bunch of featurettes. There is one on producing the film, one on the memories of making it, one on the look and cinematography of the movie, one that is a look at the psychic visions from the film, and then one on the politics of the film. Lastly there is a Trailers from Hell segment, a behind the scenes photo gallery, a collection of TV spots, and a theatrical trailer. When it comes to bonus goodies, it’s hard to beat Scream Factory, especially in their Collector’s Editions.

The Dead Zone is a great film and Scream Factory has given us a great release for it, looking and sounding great and packed with extras. Fans of horror, sci-fi, or just plain good dramas should not miss this one. Consider this one very highly recommended.