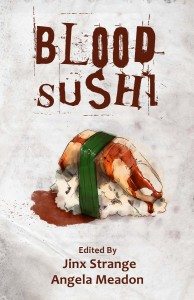 The editors of Dirge magazine have put out a sample anthology of dark and twisted stories that reflect their tastes in horror. I hadn’t heard of Dirge Magazine before reading this anthology, but you better believe I’m going to check them out now.

In 63 pages, this anthology puts you through some of the most disturbing horror I’ve read in a while. But it does so with clever wordsmithing, which can sometimes be a rarity in this genre. I don’t often say, ‘Wow.” upon finishing a story and I did so more than once with this all-too-brief collection. It’s all the more impressive that there are only eight stories in the anthology.

A bit about a few of the stories that stood out to me:

In “Happy Sunshine Music” by S.C. Hayden, a record collector thinks he’s discovered the find of a lifetime in a shop. But then he places the needle on the record. (Put the needle on the record when the drumbeat goes like this! Sorry… 80’s hip-hop moment there.) He realizes he’s found something altogether different, something all too willing to destroy anyone in earshot. Hayden’s descriptions of the sounds coming out of that record made my skin crawl and I was glad I was sitting in bed reading it as I felt somewhat more secure. A good duvet will do that for you.

A short story that is essentially the killer giving a soliloquy. I’ll admit I thought it was going to be a bit like O.J. Simpson writing the book, If I Did It: Confessions of the Killer. But Richard Lee Byers makes the first person POV work in “Honor Killing”. Although we only hear the voice of the shape-shifting bounty hunter, I could almost feel the emotions of the cop he’s speaking to. A huge part of the horror of this story for me as a woman was reading about the world in which a girl can be killed for not agreeing to her arranged marriage and trying to leave the city.

I loved Kat Dalziel’s “Remember This” for its descriptions of the protagonist’s visceral emotions: fear, isolation, confusion, and ultimate realization. So well done, I can hardly believe it’s her first published piece. It won’t be her last. It had better not be. *Shakes fist* I also appreciated that Dalziel didn’t attempt to answer all of the questions the reader is inevitably left with (“Why is this happening?”), instead choosing to leave us with the feelings of her protagonist.

A good detective story always gets my vote, and “A Splash of Blue” by Richard Dansky delivers a cool, clever detective who gets paid in emotions. Part Harry Dresden and part Phillip Marlowe, he discovers that the Blood can be a Gift or a curse. Mostly, I enjoyed that the detective was gumshoeing it around, interviewing people, going places to hunt down clues, not typing things into a search engine for a path to follow.

The final story is K.L. Grady’s “Her Mother’s Daughter,” in some ways the most unsettling of the bunch. A young girl approaching her sexual maturity struggles to keep her family happy by following the rules her late mother set out for her. But in this post-apocalyptic world, is she better off with or without her father?

I don’t know if Blood Sushi is just that—a beautifully wrapped appetizer for those unfamiliar with the Dirge Magazine publication. Maybe a little amuse bouche to garner a larger, more diverse readership? If so, it’s worked on me. (I’ve now signed up for their newsletter.) If Dirge plans to publish more stories like these—strong voices, clever twists, and inventive storytelling—I’ll be on the lookout for their books.