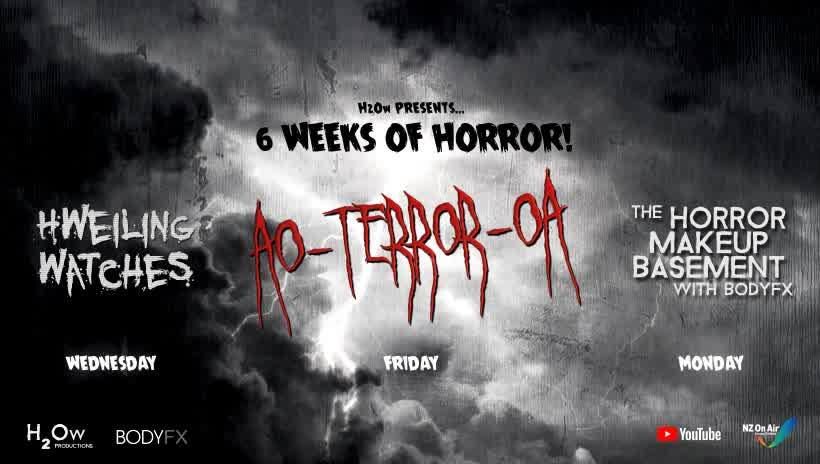 Short film Road Trip, along with its behind the scenes video are the first of six horror short films and exciting related horror content to be released online over the next six weeks.

Available at www.6weeksofhorror.com and on their H2Ow Youtube Channel, Road Trip tells the tale of a classic Kiwi summer road trip, visiting amazing locations in a cramped campervan with good friends. But what happens when your campervan turns from a pleasure vehicle to a prison…. and how long do you have to be confined in a small space together before your best mates become your deadliest enemies?

The Ao-Terror-oa anthology (A play on Aotearoa – the indigenous Māori name for New Zealand) is a delightfully dark and perverse look at everything Kiwi – from Rugby (New Zealand’s brutal national sport) in Haka Atua, the great outdoors in The Ranger or ‘fun in the sun’ with series closer Burn Time – after you see Ao-terror-oa nothing about New Zealand will appear the same again.

Jointly funded by NZ on Air and Google/Youtube as part of their Skip Ahead fund, series producer Hweiling Ow describes Ao-terror-oa as an incredible opportunity to tell horror tales that are impossible to set anywhere else, while still presenting them directly to horror fans worldwide.

Screening alongside the shorts on the series’ YouTube channel will be two additional mini-series, Hweiling Watches, where producer Hweiling Ow (whose stomach for watching horror doesn’t quite match her talent for thinking it up) hilariously reacts to watching horror films while hooked up to a heart monitor, and Basement of Horror, where Jules and Yolanda from Auckland-based special effect makeup company BODYFX give makeup tips in their own unique style.

Basement of Horror launches October 30 NZT, with Hweiling Watches launching November 3 NZT, and new episodes and behind the scenes for the shorts will release weekly as part of 6 Weeks of Horror.