An Interview with Rachel M. Martens, Author of the Poe Series 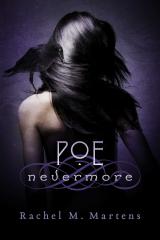 Rachel M. Martens is the author of Poe: Nevermore, an Edgar Allan Poe-inspired thriller in which a young woman must race against time and death to save those she loves while struggling with depression, a new relationship complicated by her past, and an abusive former foster-father.  Nevermore is the first in a six-book series and was self-published through Book Baby in June of 2013.  Now, Martens discusses her writing process, the shockingly realistic characters of Nevermore, the stigma of being a young, female horror writer, and the much-anticipated next installment in the series: Rest in Peace.

Where did the idea for the Poe series come from?

I believe it was Stephen King that talked about how every story comes out of a “What if?” question, and that’s exactly what it was with Poe.  I was an Edgar Allan Poe fan and a novelist looking for something original to write when my “What if?” came to me: “What if Edgar Allan Poe did have a direct descendant and what if there was a Poe family curse bringing his horror stories to life?”  That question was the foundation upon which the whole series was built.  I knew from the beginning that it would be six books and that each one would center on a horror tale; for Nevermore, it was “The Raven.”  From there, I built the skeletons of the characters and let them flesh out their own backgrounds and the subplots.

For me, the most important part of any novel is the characters, so my priority, sometimes even before I have the plot, is to create the skeleton of my narrator.  From there, I rely upon my narrator to drive the writing of the story.  As I write in their voice, I learn more about them and fill in their background.  Poe was incredibly stubborn about this because she’s not the type of person that shares well, but once I had a feel for her personality and secrets, she hijacked the writing.  I’m just her transcriber.

What was the most difficult part of writing Nevermore?

Nevermore was originally a Young Adult novel, believe it or not.  It took me about a year to write the first time and a few weeks after I had finished this 400-page novel, I came to the realization that the story and the characters would be more powerful if Poe and the rest were older.  That meant I had to scrap all but about 30 pages and rewrite the whole novel from the beginning.  The thing about rewriting is that it’s not nearly as exciting as the original creative process; it can be a chore.  But, by adding six years to Poe’s age and ten years to Frost’s, I learned so much about them as people that I had never guessed from my first crack at the book.  It raised Nevermore from a two-dimensional quality to a three-dimensional one.

Why go the self-publishing route?

After the usual starving writer routine of sending out endless query letters and receiving endless rejections, I stumbled upon an article interviewing Hugh Howey, who launched his career by self-publishing.  His take on it was this: you can either spend five years sending out queries and struggling to find time to write amidst all the effort or you can spend five years writing and selling books until the agents and publishers start calling you.  I knew my priority was getting my book out to readers and starting on the next one, so the non-traditional route made the most sense.

You’re a very young, female writer in a male-dominated genre.  Is there a stigma that goes with that?

Definitely.  Every time I tell someone I published a thriller novel, or that I’m a horror writer, they do a double-take.  I considered using a pseudonym because of it.  But, on the other hand, I admire young writers and women in the mystery/thriller/horror genres and I decided I would rather fight against the stigma than circumvent it.  I’ve heard it said too many times that being young means you have nothing meaningful to write about.  I’ve heard it said too many times that women are too faint-hearted for sensitive topics or the horror genre. I’m here to prove those assumptions wrong.

Speaking of sensitive subjects, you don’t shy away from taboos in Nevermore, in fact there’s an overload of them.  The book tackles domestic violence, rape, incest, depression, and suicide.  Many readers do not expect such topics in any book, much less one by an author of your age and sex.  What about the stigma there?

First of all, it’s important to note that I didn’t set out to build a character with a history like Poe’s.  When I create my characters, I give them enough life that they can tell me their own stories and what Poe told me was hard even for me as the writer to swallow.  But Poe is like a best friend to me and I believed that she had a story that deserved to be told on behalf of every human being who has ever suffered in any of these situations.  The thing about taboo topics is that they show some of the ugliest corners of our society and if we continue to ignore them, they continue to exist.  I wanted people to see inside the mind of someone fighting depression, wanted them to remember that every day women suffer at the hands of their husbands, wanted them to think.  Nevermore is Poe’s story and Frost’s, but it is also the story of millions of voiceless souls.

One of the strongest points in your writing is your villains.  Where does an antagonist that real come from?

Right down the street.  The thing to remember about villains is that, unless they’re some kind of demon spawn, they are human.  Jonathan Aaron is human, Nina Faucett is human, Lex Rydenor is human.  Remembering that and combining it with their dark sides is what makes them scary because they could be the psycho on the news just as easily as they could be the next door neighbor you wave to every day.

What can readers look forward to seeing in Rest in Peace and when can we mark our calendars for?

Rest in Peace picks up about a month after Nevermore leaves off with Poe and Frost both struggling to recover psychologically from “The Raven.”  As if things couldn’t get worse, Poe learns that Lex, the man who raped and tortured her, is now stalking her and she is quickly swept into a dangerous game of cat and mouse.  What I think readers will be most excited about with Rest in Peace is that, first of all, Poe is forced to confront the man who destroyed her mental stability.  Second of all, Frost gets both more time narrating and a chance to show his tougher side.  Nobody threatens his girl without some serious consequences.  And finally, Rest in Peace is spear-headed by a villain that you love to hate so much it becomes addictive.  All of that will make for a really exciting novel for Poe fans.  As for marking calendars, assuming all goes as planned, Rest in Peace will be available as an e-book through Amazon on June 13th, the one-year anniversary of Nevermore’s publication date.  Eleven other online retailers, including Barnes&Noble, the iBookstore, Scribd, and Sony will release it in the three weeks following.

What’s next for you?

Right now my priority is Rest in Peace, but I’m also working on several stories outside the series which I’d like to get out too.  Each one of my characters has a different story to tell, not just Poe, and I’d like to give the others a chance to share.

Before we go, do you have any advice for aspiring writers?

No matter where you are in your career, if you have an agent already or if you just learned the mechanics of storytelling, figure out what you want to accomplish with your writing and never forget that.  For me, the important thing was the characters and when I forgot that and started prioritizing things like marketing and finding agents, I struggled.  Don’t let that happen.  Figure out what matters, write it on a Post-It note, and stick it to your computer screen or your desk, somewhere you can’t forget it.  Don’t worry about the rest, just focus on reaching that one goal and everything else will come.

Poe: Nevermore is available as an e-book through eleven major retailers, including Amazon, Barnes&Noble, and the iBookstore.  Paperbacks are available through Amazon only.  For more on Rachel M. Martens, the Poe series, and Martens’ other works, check out www.rachelmmartens.com or Like her page on Facebook at www.facebook.com/rmmartensauthor.