Advance Review: PEEL BACK AND SEE 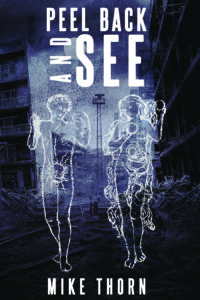 My first encounter with Mike Thorn’s work was his engaging first collection, Darkest Hours: Expanded Edition, also published by JournalStone, which I reviewed here. I’m delighted to say that I enjoyed Peel Back and See as much as Darkest Hours.

This is a truly eclectic collection of sixteen short stories (Darkest Hours provided a mix of fiction and non-fiction essays on horror cinema) that are hard to categorize neatly because of their breadth of subjects and themes. Each tale is supplemented by highly additive author notes that delve into context, inspirations, themes, and tropes. It’s not possible to go into each story here, but I do want to call out a few of my favorites.

Thorn uses mental illness as a common theme in his writing, and he does it well. I would especially note “Deprimer,” “Havoc,” and “Fade to White.” In “Deprimer,” a deeply depressed man at his wits’ end encounters a doctor who promises to rid him of his inner demons, which are responsible for the man’s mental illness and unhappiness. The process works, but I’m not sure that most of us would consider it a success. In “Havoc,” a suicidal college student becomes obsessed with an internet video he is introduced to that might possibly show a demon. And in “Fade to White,” which closes out the collection, the narrator is yet another mentally ill man who retreats from his troubled past into a series of hallucinatory experiences with camgirls until he meets Ashley, who ushers him into a series of new experiences that…well, I’d better not reveal more. Thorn describes this story as his “Bret Easton Ellis” homage; I can see that, it’s a hallucinatory tale, and unclear if the out-of-the-ordinary-events are happening in the real world, or only inside the narrator’s mind. In any case, Thorn handles the subject of mental illness with a deftness and sense of realism—even though these stories often introduce elements of the supernatural—that I very much appreciate.

Thorn is a writer and an academic, and as such he seems to have had first-hand experience with what he describes as “creative inertia” or writer’s block in its various forms. That theme comes through powerfully here in both “@GorgoYama13” and “The Voiding,” as it did in his story “Sabbatical” in his first collection. In “@GorgoYama2013,” songwriter Victor hasn’t written music in a year, but he makes a new online friend who rejuvenates his interest in music and decides to meet that friend in real life. While this story is in some ways about the horrors of social media, it also contains a truly creepy bit of body horror I especially enjoyed. In “The Voiding,” Dr. Term and his organization offer a way for artists and writers to get their careers back on track and produce a bestseller. However, this professional success comes at an unspeakably high cost.

There are almost too many wonderful stories in the collection to comment on, and I am leaving out several favorites, but will just briefly mention a few more that really stuck with me. In “Mr. Mucata’s Final Requests,” Lucinda is a servant for a wealthy occultist on his deathbed who is trying desperately to avoid his fate. Jimmy is a street urchin taken in by benefactors in “The Finger Collectors,” who just have a small task for Jimmy in exchange for his room and board. In “Offer to the Adversary,” Kat is an art historian who becomes obsessed with, and perhaps even a part of, the sacrificial tableau depicted in a painting. And in “Virus,” Thorn once again demonstrates just how skilled he is at realistically depicting teenagers, as two teenage girls (and one really annoying dad) deal with an incredibly creepy website that just might be bleeding over into the real world.