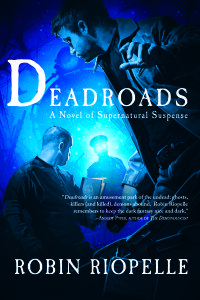 The Sarrazins are a family of traiteurs—faith healers with various abilities to see and communicate with ghosts—but it’s the various abilities they possess that tear them apart. Their abilities are alternately a gift and a curse, some of the characters have accepted this and live their lives, others self-medicate in order to get by.

But when demons get involved, it becomes too much for them to handle separately and the brothers Sol and Baz have to hunt down their estranged sister, Lutie for a showdown with a truly Big Bad.  Any more on this and I think I might be delving into spoiler territory.

I enjoyed Riopelle’s adept way of creating atmosphere and crafting broken, yet believable characters. I love when horror takes on settings that are atypical of the genre. The main characters of this story are from the Louisiana Bayou and I loved that milieu and that Riopelle has an amazing command of dialogue in several languages. Cajun, French and Acadian are featured in the tale and are not italicized or explained, which I found this refreshing and made me more involved in the story. However, I can see some readers not comfortable with Riopelle’s choice in doing so.

Also engaging was the matter-of-fact way many of the characters talk to and about ghosts.  They are a part of their world, treated as fixtures instead of anomalies. Deadroads also has a slow reveal of the central mystery that I enjoyed.  However, it’s the kind of book that takes a bit of time to get to the final conflict and that may be off-putting to some readers. The title of the book tells you this is not a horror novel, and I agree that it isn’t. But it is engrossing, mysterious, and, at times, heart-breaking.

For me that was enough to make this a powerful read.