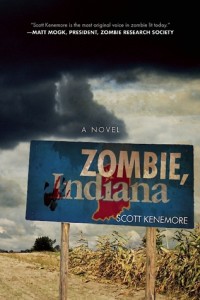 Scott Kenemore’s Zombie, Ohio: A Tale of the Undead appeared in 2011, followed a year later by Zombie, Illinois: A Novel. Now, after a two-year hiatus, comes the third in the series, Zombie, Indiana, in which an outbreak of zombiism threatens to disrupt, if not destroy, life in southern Indiana.

Kenemore approaches the undead from an appropriate direction in this latest installment. That is, the novel has zombies but is not about zombies. They are among the least interesting of horror creatures for me, largely because I find it difficult to empathize with or become otherwise emotionally interested in characters who have no chance of changing. (One reason I found Patrick Freivald’s Twice Shy and Special Dead delightful was that he understood this likelihood and restructured his zombies accordingly.) Such intrusions among the living and the lively function best as backdrops, as in Joe McKinney’s remarkable Texas-based stories, in which zombies are often essentially just the latest in a series of natural disasters to be survived. And, indeed, when Kenemore’s zombies arrive in full numbers and menace Indianapolis, they are quite legitimately treated as the equivalent of such a disaster, described in terms reminiscent of floods and suggesting the total destructive power of massive mud slides or torrential rains.

The true characters in the novel—the ones the reader feels justified in investing in—are all-too-living and all-too-human. When the daughter of Indiana’s governor goes missing during a school outing in a cave complex several hours from Indianapolis, the governor sends in his own pet policeman, six-foot-nine Special Sergeant James Nolan to find her. As the novel progresses, Nolan withstands attacks by underwater zombies; negotiates a warren of caverns and tunnels in the dark, accompanied by possibly the only survivor of an earlier attack, Keesha Washington; outshoots hordes of lawless “normals” taking advantage of the sudden lack of law enforcement; locates Keesha’s father, who has set out to kill Governor Burleson for reasons of his own; discovers the apparent reason for the zombie incursion and the identity of those behind it; and returns to Indianapolis in company with a motorcycle gang to galvanize mobs of terrified civilians against the oncoming zombie hordes.

Along the way, Kenemore spends a good deal of time exploring the backgrounds of Nolan, Keesha, Governor Burleson, and Madison Burleson, each of whom harbors secrets that transcend the zombie menace and threaten life, civility, and stability in Indiana—no one knows for most of the novel whether the undead have attacked elsewhere yet.

There are some interesting twists. The zombies are apparently quite weak, incapable of battling their way out of caskets; so most of them rise from shallow, illicit graves where bodies have been hidden by murderers, kidnappers, mobsters, and others interested in secret burials. And apparently, there are a lot of such burials in Indiana, given the numbers of zombies that appear—many of them, curiously enough, in a large golf course. So when the police decide in their great wisdom to apportion much of their strength to patrolling cemeteries, they find that they have no one left to fight the zombies.

Most intriguing of all is the personality of Governor Burleson. He is publicly dedicated to his state, since privately it is his stepping-stone to his ultimate goal, the White House. He has made it the most business-friendly state in the Union by reducing restrictions on businesses, giving them free hand in polluting the soil, the water, and the air. He is secretly allied with “BP,” the largest oil company in the state; and because of that connection he adamantly refuses to call for federal help—the dreaded “F-word”—in dealing with the outbreak. Even at the ostensible last moment.

And here is where Zombie, Indiana, loses some of its power. As well-written and as smoothly narrated as it is, it stumbles in its conclusion. Throughout, the text throws out hints as to what—and who—might be responsible for the zombies. Everything up until the final pages suggests that James Nolan, Madison Burleson, and Keesha Washington somehow hold the key to understanding and stopping the zombie plague.

Then, ten pages or so from the end, a miracle happens—a literal deus ex machina appears to save Indianapolis; Governor Burleson is revealed as the lying, deceitful politician that he is; Nolan is relieved of a tremendous burden that he has been bearing for years; all secrets are exposed, the most important by a character entirely new to the story; and everything the reader assumes about the zombie invasion turns out to be wrong.

There is nothing devastating about all of the revelations; they simply need more time, more page-space, to be integrated more seamlessly into the novel. And they don’t receive it.

On the whole, Zombie, Indiana, is by and large well-enough told and a fun action-adventure novel that basically doesn’t need zombies for most of its narrative to hold together. It is fundamentally a political satire, a mystery, a chase-thriller, a mild environ mentalist screed that…oh, yes…also has zombies.