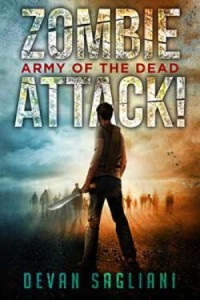 Just when a glimmer of hope seems to illuminate in restoring some normal society, Xander MacNamara finds himself engulfed in turmoil once again. Happily married to the love of his life Felicity Jane and adapting to his newfound military rank in Freedom Town life is good. Little does he know his new found comfort is merely the calm before the storm. There appears to be some deception in the ranks.  A fellow actor has taken a shine to Felicity Jane that doesn’t sit too well with Xander. His actions and reactions cause an impromptu court marshalling and banishment from Freedom Town. While being shipped to another base a mysterious assailant named Sonya appears and breaks him and Felicity Jane free of their shackles. Now officially on the lamb, danger lurks at every corner as he learns there is a bounty on his head. With obstacles and adversity around every corner, Xander and company vie to stay alive before ending up in the clutches of his former nemesis John who has a sinister plot to unleash a genetically altered legion of super zombies. Will Xander be able to reunite with his brother Moto and salvage civilization with the cure or will their efforts ultimately succumb to the Army of The Dead?

Army of the Dead (or Zombie Attack 2 if you prefer) serves as equally effective as a stand-alone novel or if you enjoyed its predecessor Rise of The Horde. In a genre that is bountiful with sequels, the author has a firm grasp with maximizing his marketing potential in outreaching to the largest mass audience as possible. While I strongly encourage curious readers to enjoy the first volume, readers who happen to stumble along Army of the Dead first will certainly have no regrets.

One of the first things I noticed about this edition is the vast array of varying settings. We’re led into a journey with frequent change of scenery, keeping us engaged and swirling our subconscious deeper into the thick of it all with a mesmerizing clarity of the action that unfolds.

Rising tension is presented unto our protagonists that we’re familiar with from Rise of The Horde and some new faces as well. We get a little deeper into understanding what makes our characters tick and the madness that lies behind our antagonists’ eyes.

The inner monologue of lead character Xander is heartfelt and enhances his realism. Insecurities and doubts that each of us can readily relate to surface time and again. We get behind Xander even further reinforcing our admiration in his plights and conflicts.

Dialogue tells a great deal of the tale strengthening interpersonal relationships and showing the story rather than telling. Exposition is revealed for those of us unfamiliar with certain circumstances and brings us right up to speed. All the while deep, inner emotion is high-lighted without coming across as gratuitous or extravagant, no easy feat for even the most seasoned of authors and Sagliani achieves this in spades.

Some have gone so far as to label Army of The Dead as a teen or young adult novel where I’d tend to have to disagree. The concepts or vocabulary and underlining themes certainly haven’t been toned down. If anything the grisly details will have even the most cynical of horror fans squirm with delight. Suffice to say there is a little something for everyone in Army of The Dead.

It’s been a thrilled and esteemed honour to witness this author Devan Sagliani flourish into the level of story-telling in which he’s achieved today. I’ve been an avid enthusiast along his journey from The Rising Dead to Undead LA and Rise of The Horde. Army of the Dead is arguably his most polished effort to date. His sense of comedic relief interwoven with gripping suspense, action and characters we can all relate to certifies this read as a future classic in a sea of unrelenting subgenre