Zombie Attack! Army of the Dead 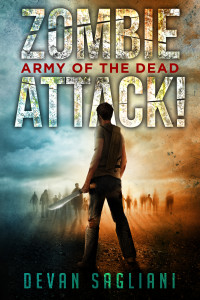 Once again Xander and Felicity find themselves on the run from a never-ending series of threats including bikers, warlords, ninjas and more. Meanwhile a hidden enemy is working on a secret weapon: genetically engineered super zombies! Friends and soldiers are pitted against each other as one side races to spread the cure while the other battles to gain ultimate control over the fate of mankind.

Devan Sagliani was born and raised in Southern California and graduated from UCLA. He is the author of the Zombie Attack! series, The Rising Dead, A Thirst For Fire, and the UNDEAD L.A. series. Devan also wrote the original screenplay for the movie HVZ: Humans Versus Zombies. He currently writes a bimonthly horror column for Escapist Magazine called Dark Dreams.

Devan’s fiction has been nominated for the Pushcart Prize and the Million Writers Award. In 2012 his debut novel Zombie Attack! Rise of the Horde won Best Zombie/Horror E-book on Goodreads. He is also an active member of the Horror Writer’s Association. He currently lives in Venice Beach, California with his wife.

Praise for ZOMBIE ATTACK! RISE OF THE HORDE:

“An excellent composition of prose, action, dialogue and foreshadowing is Rise of The Horde that is indicative of a well-seasoned story teller. Devan Sagliani’s endeavor is tremendous in luring readers into anticipating more and more.” Horror News

“Devan Sagliani breathes new life into a tired over indulgent genre. Many avid readers will have difficulty putting it down.” Hellnotes

“This was such a super fun and highly entertaining story, I could not put it down! I highly recommend this book to anyone who enjoys badass characters and bold story lines, you won’t be disappointed!” Bookish

“Sagliani manages to pull out another winner.” Bookie Monster

“What really brings this entertaining story together is Sagliani’s writing style. He turns violence into poetry.”  Bricks of the Dead

“The story moves very fast…readers won’t find any time to be bored. Fans of Jonathan Maberry’s “Rot and Ruin” series will like this one as well. I’m eagerly waiting for the rest of this series!” Living Dead Media