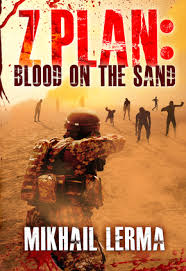 It should be noted that Z Plan: Blood on the Sand is the first book in a series. There is nothing more annoying to me than a novel than has a cliffhanger ending when the author does not warn you it is the first book of a series. So when Mikhail Lerma and his publisher avoids this trap and lets the reader know this from the beginning, I become extremely grateful.

But it also gives me another challenge. No longer is the review just about whether I like the book or not. it also becomes: Is it good enough to warrant investing time and money to the rest of the series?

Let’s hold off on that question and consider the first one.

Blood on the Sand starts in Iraq with US army soldier Cale involved in his tour of duty and missing his family. However an unexplained plague of zombies cuts him and his friends off from the rest of the world when the creatures invade the army base. With the base virtually destroyed, Cale and three of his friends make a Zombie Plan; to leave Iraq and head to the Mediterranean where they hope to catch a boat to go home to America. Technically they are deserters but with the rest of the world on the brink of extinction, it seems to be a moot point.

One of the best things about this novel is how the author uses his military experience to write a very believable scenario, except for the zombies of course, involving the attack on the base. The first third of the novel is a creative blend between a military novel and a zombie tale. Lerma’s zombies are pretty much straight out of Walking Dead; mindless and always hungry. However the author does the very wise move of focusing our attention on one character and his reason to survive. Cale is likable and determined but no superman. He has his weaknesses and doubts which makes me want to root for him even more. We feel his pain when he needs to make a decision that has no easy answers. The ability for the author to make his main character a flawed but good man in a bad situation is what makes this zombie novel different from the rest of the pack. The action segments are very well written which again attests to the author’s focus on the military aspects and the reality of combat even as our heroes leave Iraq to go on their journey.

There are some aspects to the book that tells me this is a first novel. For instance, the changes in perspectives seems a bit awkward and there are some lulls in the book that break up the tensions more than necessary. But these are minor things considering how well most of the book moves and how the author keeps the reader involved in the story. Overall it is a formidable debut.

But what about that cliffhanger? Am I ready to invest emotionally in the series?

In a word, yes. When I got to the end, even knowing that it would be continued, I felt I read a complete first part of the series. The ending, which of course I won’t reveal, was a satisfying first installment that had me looking forward to a more revealing second installment. That is the way a series should work.

Those who crave the Z’s (Zombies) and want a series who’s Z Plan (Zombie Plan) has a determined and realistic protagonist will enjoy this novel. Hopefully the rest of the books will be as intriguing as Blood on the Sand for it is a very promising start.