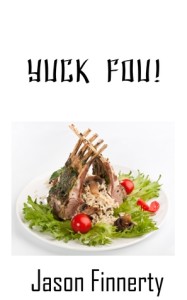 Yuck Fou is a short story of approximately 5,000 words describing what a woman is willing to endure to have her revenge. Finnerty warns you that this story will leave a bad taste in your mouth. And he was right.

With short stories, the plot should become evident rather quickly as the author doesn’t have the time or word count that comes with a novel to do a lot of back story or foreshadowing and the like. Yuck Fou’s action started in the first sentence. While many publishers will tell you to start with a hook—something to catch the reader’s interest—I thought this was jarring. When a book begins in medias res—in the middle of the action—the writer runs a risk that the reader doesn’t know enough about the characters to truly care about what is happening to them.

The story focuses on two main sections of action: a robbery gone wrong and the victim’s revenge two years later. Each of the action scenes is vividly written, with particular attention paid to the vile and gruesome deeds.

There is little time spent on why the victim made the decision to pursue the disturbing course of action she did. I would have liked to read about the character wrestling with the mental breakdown that seems likely to accompany the trauma she endured and that may have helped me understand her choices.

Yuck Fou may have benefitted from one consistent point of view. There were several POV shifts during the action scenes and they took me out of the story line. Yuck reads like a description of the action in a movie and that may be reason the story is so light on characterization. In visual media we can look at a character’s face and body language understand the majority of what’s happening. (“Battlefield”, one of the movies in Stephen King’s Nightmares and Dreamscapes is effective without the characters having any spoken lines at all.) With the written word, the reader needs more to connect them with a character’s situation.

Finnerty created a horrible situation for his protagonist to deal with and that was well done, as some writers tend to shy away from damaging their characters. The text was free of grammatical and punctuation errors, something that can be a rarity in self-published fiction. However, I was left feeling that the ending was written for shock value only and I didn’t have any sympathy for those involved.

If you enjoy a story focused on action that delivers on the author’s promise of a twisted ending that will leave you with a bad taste in your mouth, Yuck Fou may be what you’re looking for.