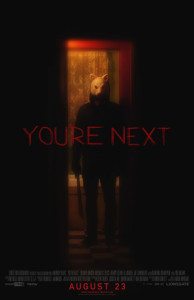 From the promotional posters of You’re Next alone, it’s possible to discern what kind of horror territory we’ll soon entering. Though the ‘home invasion’ motif as a key plot device goes back many decades, it’s outings like the original When A Stranger Calls and 2009’s The Strangers that bring to mind the most accomplished efforts. While there is nothing cerebral about these storylines, they still (for the most part) manage to do one thing: scare audiences. Unmotivated murder, for all its lack of mystery, remains terrifying because of its sheer mystique; evil for the sport of it, where no amount of plea bargaining or desire for mercy will likely get results. Though a motivation does surface in the latter stages of You’re Next, it’s a revelation that ultimately hurts the viewing experience.

After an old school slasher scene opens proceedings (with an ominous lamb mask doing the duty), we are then privy to the lives of Crispian Davison and his fiancée Erin on their journey to a wealthy family reunion at a secluded vacation house. It’s Crispian’s parents’ wedding anniversary, and joining them for the fun is the whole Davison entourage: brothers, sister, and all their respective partners. Of course, with all that blood-kin under one roof it isn’t long before tensions arise – sibling jealousies, parental judgements, and attempts at humour that go astray. Though I’d previously heard criticisms You’re Next is ‘slow to get going’ – this reviewer found the build up an essential part of establishing some sort of emotional connection with the soon-to-be slain. There’s Erin (the wily accented Australian with hardcore survival skills), there’s also Drake … a yuppie son who leads the tensions. With some of the other players almost mute, the upsurge of dialogue and character growth gives the film a splash of sophistication where it would have been all too easy for the writers to proceed directly to carnage.

And that’s where things get tricky: the carnage. On one hand we have a memorable dinner scene, complete with errant arrows that take out some of the tribe in interesting ways. On the other we have all surviving family members (in the aftermath) behaving as though they’ve just finished watching 1980’s horror: 101 stupid things protagonists do when confronted by killers. Of course, this is me being facetious … but there are more than enough cringe worthy decisions put on show here that a percentage of you will switch off. The rest, no doubt, will be staying for the revelations – mysteries revealed that put a vulnerable and all-too-human face on our cabal of animal-faced killers. One positive thing on show is some slapstick family dynamic: though almost none of them are overly likeable, there are just enough comedic turns in the second act to keep You’re Next chugging along nicely until the final one.

All told – and when the end credits are finally rolling – we have a horror film that is worth your time. The methods of dispatch are compelling (no guns are used at all in our maiming), and some scenes toward the climax are inane and creative enough to be funny. Always simmering underneath the surface – particularly for the music score – there is a subtle eighties homage going on, both writer and director hamming it up for audiences with gore filled splendour we may have seen before but find difficult to place. Though the masks used will not produce any future icons, they are certainly creepy enough to find a place in someone’s Halloween ball of the future. Mostly, audiences will get a kick out of seeing our take-no-prisoners Australian heroine. You’re Next, for all its minute low budget flaws, is still a film that will hold the collective tribe’s attention from first frame till last.