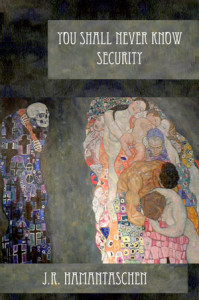 You Shall Never Know Security

The thirteen stories in You Shall Never Know Security are…strange. A character in one story uses the word surrealistic to describe a situation; it is equally appropriate as a description of the entire collection. Another character in another story borrows the oft-overused (although here appropriate) Lovecraftian word eldritch; and again, it resonates through every story—unearthly, weird, eerie.

The overall tone of the stories is neatly encapsulated in a headnote from Edward Bellamy’s Looking Backward: “’Do your work never so well,’ the spectre was whispering, — ‘rise early and toil til late, rob cunningly or serve faithfully, you shall never know security.’” In the aptly named “There’s Always Something in the Misfortune of Our Friends That Doesn’t Please Us,” Hamantaschen restates this idea in his own words, providing a leitmotif for every story:

Think of your family. Your goals. Your ambitions. All that, all that history. Think of them, and the direction of your life.  The narrative arc you’ve invented for yourself. Projects you planned on attempting or completing. All those things left unsaid between you and your friends and your family and everything you know. And love, think of your quest for love, love from the world, and your quest for a more personal love, a spiritual love, an intimacy to share with someone.

You knew that one day you’d die, but that was just an abstraction, the last page in a story you were chapters and chapters away from. That story ends tonight.

And that is the way the stories in You Shall Never Know Security—and the lives of many of the characters—end. Abruptly. Unexpectedly. Strangely.

The essential eeriness begins in “A Lower Power,” an initially traditional love story between the narrator and a man with a face “that gets him noticed” and remarkable black hair. Unfortunately for her, as the story progresses, other things about him also become remarkable—notably his ability to scurry across the ceiling at night. From that point, there are no rules, no safety, and no hope.

“Wonder” is a short riff on invisible revenge that comments that “minds only stretch so far,” then proceeds to stretch the readers’ imaginations until they snap…or the characters do. “Endemic” uses multiple time-frames and multiple viewpoints to consider a problem ‘endemic’ to human societies: rape. Science has developed a sure-fire deterrent, only to discover that the problem may be more deeply rooted than ever thought.

In several instances, the titles themselves are sufficient to create an undercurrent of discomfort. In addition to “There’s Always Something in the Misfortune of Our Friends That Doesn’t Please Us,” “’Jordan, When Are You Going to Settle Down, Get Married and Have Some Children?’” and “There is a Family of Gnomes Behind My Walls, and I Swear I Won’t Disappoint Them Any Longer” simultaneously suggest normality and the deeply abnormal that is to follow. The innocuously named “College” is in some ways the most frightening of the stories, largely due to the disparity between the title—suggesting an institution devoted in some way to improvement and growth—and it’s truly horrific conclusion.

You Shall Never Know Security avoids being a one-note collection—depression and despair—by the sheer ingenuity of story twists and character development…or, perhaps better said, character devolution. Readers beginning each story will almost immediately intuit a wrongness; yet even in doing so, they will reach the endings startled and surprised.