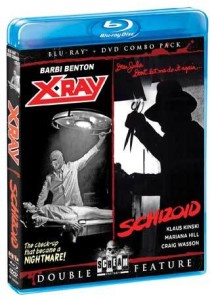 This two pack of 80s horror movies about blade-wielding psychos is the first time either of these films have been on Blu-ray. Heck, I’m pretty sure it’s the first time either has been on DVD. Yes, this is a Blu-ray/DVD combo, combo pack. That’s a whole lot of bargain for one low price. That is, if the movies are any good. So in this case, are they? Well grab a doctor’s mask and a pair of scissors, we’ve got a couple of fright flicks to watch.

First up is X-ray from 1982, also known as Hospital Massacre, and it is a straight up slasher flick. It stars former Playboy bunny Barbie Benton as a woman named Susan. As a girl, a creepy boy had a crush on her, but she spurned his advances on Valentine’s Day. Bad mistake. After a quick murder to show the extent of the kid’s psychotic devotion, the movie jumps ahead a decade or so and now Susan is a beautiful young woman who goes to the hospital for a quick check up. Bad mistake number two, because a mystery man there kills Susan’s doctor and then “doctors” (ha) her test results to make it look like she has some terminal illness. So against her will she is checked into the hospital, just where the unknown psycho wants her to be.

What follows is some pretty standard stalk and slash, but it does get some points that elevates it above the generic slasher fare that was churned out en masse in the early 80s. The killer dresses as a doctor complete with surgical mask and gown and uses hospital tools and equipment as his weapons. So he gets points for sticking with a theme if nothing else. There is the mystery in this movie as to who the killer is. I mean, you know it is the creepy kid from the prolog, but you don’t know who the creepy kid is now in the present day. There are a few creative kills to be found here, but very little blood for the most part, so I would call that a wash. However, Barbie Benton does show off how she got famous with some gratuitous nudity during a prolonged topless medical examination. I always loved how in this scene the camera starts off behind her and then slowly circles around as if saying, “Yeah, we all know this is what you want to see.” You’ve got to love the 80s slasher film. So for all these reasons and more, I really dug X-ray. No it won’t make anyone’s Top Ten Slasher Films list, but it delivers the goods, does so well, and was an enjoyable watch.

Schizoid from 1980 feels much more like an Italian gialo movie than an American slasher, despite it being made in the good ol’ U S of A. And if you don’t know what the difference is between those two types of movies are, you really need to watch more classic horror movies. Great examples of gialo films would be Deep Red, Bay of Blood, Blood and Black Lace, Tenebrae, and Torso to name only a few. Great slashers would be Halloween, Friday the 13th, My Bloody Valentine, Happy Birthday to Me, The Burning, The House on Sorority Row, Madman, Scream, and I could go on and on. OK, so now does everyone know the difference in these somewhat similar but different enough genres? Good, let’s move on.

In Schizoid a bunch of women in group therapy are being viciously murdered by a scissor-totting nut job wearing a fedora and of course, black gloves. One of the women of the group is Julie, our heroine who is a newspaper advice columnist, and she starts getting threatening letters from someone telling her that they’re going to kill her. So the mystery at the heart of this movie is who is doing the killing and why, and there are plenty of suspects to point the finger at. From Christopher Lloyd (yep, good old Doc Brown) as a creepy janitor, to Klaus Kinski (who has pretty much played a creep in every movie he’s ever been in) as the group’s psychologist who likes to bone his patients when he’s not giving longing looks at his daughter as she showers. Eewww. There are also a bunch of “that guy” actors in this movie for you to discover. You know, the type of hard working character actor you see in a bunch of movies, and while you might not know their name, you seem them and think, “Hey, I know that guy.”

Overall, Schizoid is a solid, if somewhat predictable towards the end murder mystery. It has a nice dose of sex in it, but the violence is kind of weak with stomach stabs by scissors being the go to murder modus operandi. With this many seasoned, or soon to be seasoned, actors in it, the acting is almost always good and the direction is competent by David Paulsen, even if this would be his last feature film and he would then exclusively direct for TV. However there is nothing really amazing, unique, or memorable in this movie, so it is well done but not particularly noteworthy.

On to the extras on this two pack from Scream Factory. First, both movies come two on a disc on both Blu-ray and DVD. So no matter what kind of media you’re set up for, you can watch these flicks. Now because these are doubled packed on a disc, there’s not a whole lot of room left for extras. But really, for two mostly forgotten films like this, I’m not surprised they aren’t jam packed with special features. And hell, just having them on Blu-ray is bonus enough for me. Anyway, X-ray has a 13 minute interview with director Boaz Davidson for it. Schizoid has a 10 and a half minute interview with actress Donna Wikes and the original trailer for it. Neither comes with any commentary tracks, but both look really good on Blu-ray. Once again Scream Factory has done a fine job making these movies look the best that they ever have.

For fans of slashers or gialo films, or if you are like me and love both, I can easily recommend this X-ray/Schizoid double bill. I think X-ray is the stronger of the two here, but Schizoid is now slouch. Consider this a must have disc for any lover of 80s horror.