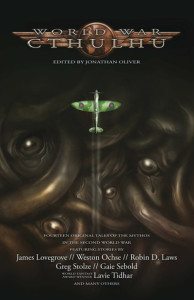 World War II was, by itself, an unmitigated horror; and even beyond documentary accounts of atrocities and barbarities, it has served as the source of literary horror as well. Such stories as F. Paul Wilson’s stellar The Keep (1981)—long one of my favorites using a WWII landscape–frequently pit Nazis against supernatural, ravaging entities that, in a sense, give them precisely what they deserve.

(The novel was made into a less-than-stellar film, by the way, which—for those who might have missed it thirty years ago—is now running full-length on YouTube at: http://www.youtube.com/watch?v=hMYExzEOmic.)

Lovecraft and his Cthulhu Mythos are of course also virtually unending sources of horror, whether the tales are set in Lovecraft’s own backwoods New England or in the farthest reaches of outer space and alternate dimensions. Collections of such stories abound and are always good for a shiver or two.

Jonathan Oliver has taken an obvious but welcome step in combining these two sources in World War Cthulhu, evocative (and often provocative) Lovecraftian tales set amid the authentic horrors of World War II. With stories by Jonathan Green, Weston Ochse, Simon Bestwick, Sarah Newton, James Lovegrove, and nine other highly effective storytellers, the anthology never falters regardless of the frequent shifts in landscape, mood, and theme. Every one of the stories works, and works well.

What makes the volume particularly interesting is the way the authors blend history and mythos. One might expect stories of perfidious Nazis performing obscene occult rituals to call forth the Lovecraftian unnameables and enlist their effort in defeating the Allies. And they are there, as in John Llewellyn Prober’s ghastly “The Death House.” But Oliver—and Cthulhu—does not play favorites. Almost as intriguing and certainly as uncomfortable are those in which the Allies succumb to temptation…and themselves seek the services of darkness. Jonathan Green’s “The Scottish Patient,” set in a dream-like England, explores this possibility. Weston Ochse’s unforgettable “When I Knew Baseball” goes even further; the “good guys” not only sacrifice their own men to an unspeakable creature but (and I don’t think I’m giving away too much of the story here) their men volunteer to be sacrificed…in a particularly horrifying way.

It seems a bit odd to talk about the pleasure of reading stories of gore and horror and death…yet each of Oliver’s selections was in fact a pleasure to read. Each was skillful, well handled, and masterfully told.