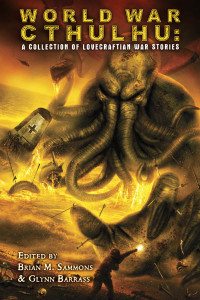 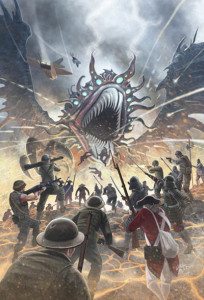 The book will be published in ebook, trade paperback and signed limited edition hardcover format. All physical editions offered during the Indiegogo campaign are campaign exclusive editions that will not be offered for sale after the campaign featuring unique designs and extras not offered in market versions. All editions are offered at planned retail price (or cheaper) with free U.S. shipping included. The Collector’s Deluxe Signed Slipcased hardcover edition is only offered through this campaign! All books printed and bound in the USA.Your support during this campaign will enable World War Cthulhu: A Collection of Lovecraftian War Stories to be published and possibly expand beyond its original scope (see stretch goals below). Join us for the campaign before it ends on Sunday, April 20th and please spread the word!

Thank you for your support!

Join us for the Indiegogo campaign at: http://www.indiegogo.com/projects/world-war-cthulhu-a-collection-of-lovecraftian-war-stories-with-illustrations