Word Horde Announces Release of The Children of Old Leech 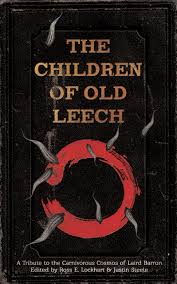 PETALUMA, CALIFORNIA—Word Horde is proud to announce the release of THE CHILDREN OF OLD LEECH: A TRIBUTE TO THE CARNIVOROUS COSMOS OF LAIRD BARRON. Editors Ross E. Lockhart (THE BOOK OF CTHULHU, TALES OF JACK THE RIPPER) and Justin Steele (THE ARKHAM DIGEST) have gathered together many of the brightest lights in dark fiction to pay homage to one of horror’s masters.
Over the past decade, Laird Barron has become one of the most lauded and influential names in horror fiction. His short stories, two novels, and three collections have garnered numerous nominations and awards, including three Shirley Jackson Awards and a Bram Stoker Award. Recognizing Barron’s meteoric rise, Lockhart and Steele sought to assemble an original tribute anthology unlike any other, focusing on atmosphere and affect, rather than simple pastiche.
“Barron’s fiction has long been an inspiration to his peers,” says co-editor Justin Steele. “The interwoven stories and novels create a rich tapestry of noir-infused cosmic horror. This mythology makes for an excellent backdrop for the weird tales within.” Offered this unique opportunity to play in what Publishers Weekly calls Barron’s “worm-riddled literary playground,” these children of Old Leech—Barron’s fans, peers, friends—conjured an anthology “with a coherent feeling of dread, without feeling derivative of the source.”
On Tuesday, July 15, 2014, Word Horde will commemorate the book’s official release with a virtual toast to Old Leech himself. Throughout social media, authors and readers alike are encouraged to share their thoughts about the anthology and its inspiration, Laird Barron, using the hashtag ‪#‎TCoOL‬.
THE CHILDREN OF OLD LEECH is distributed by Ingram, and will be available in Hardcover and eBook formats through most online retailers and better independent bookstores everywhere in July 2014. For more information about Word Horde or to request an electronic review copy, please email publicity[at]wordhorde[dot]com.
http://wordhorde.com/