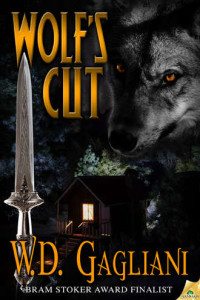 Wolf’s Cut is the fifth volume in a series involving a werewolf homicide cop named, appropriately enough, Nick Lupo. As such it shares the strengths and the weaknesses of serial narratives.

Its strengths are a solid sense of characters—major and minor—as they enter this story with detailed backgrounds, motivations, and responses to their various situations…for several, how they handle being werewolves. There is an equivalent sense of solid landscapes, mapped in earlier novels and continued in this one.

Its weaknesses, unfortunately, are intimately connected with its strengths. Many of the characters and situations continue from earlier stories, and Wolf’s Cut devotes much of its first fifty or so pages to stopping the current story—the mob’s attempt to take over a reservation casino—and giving detailed flashbacks into characters, organizations, actions, and other carryovers. One particular piece of information is emphasized at least six times, when readers (especially those familiar with the series) would lock it in after the first repetition.

In addition, throughout most of the book, there are half a dozen hubs of action, until a seventh is suddenly added three-quarters of the way through. Managing shifts among the various landscapes—and times, since portions move back to post-WWII Italy—without disrupting the threads associated with each character proves difficult, increasingly so as the story progresses.

Add to that the dozen or so major characters, often referred to by their situations in previous novels, and Wolf’s Cut becomes a potentially solid story that threatens to get lost in its own minutiae.

Gagliani’s take on the werewolf motif is interesting, but as with other points it sometimes clogs the storytelling. A key factor in combatting the creatures is their horrific reaction to being stabbed by one of two silver-bladed knives from the Vatican; and each time the story refers to the Vatican silvers, it stops to recount bits of their history, to describe their power against werewolves (as if showing it were not sufficient), and, more disturbingly, to repeat and repeat that these are the Vatican knives, not just any old silver blades.

Another element in the makeup of his creatures is their increased libido, based upon fundamental changes in DNA subsequent to being bitten. Again, that is an intriguing detail that should strengthen Gagliani’s representation. Unfortunately, again, it begins to overshadow all of the werewolves, their actions and reactions. At least one character slips into almost a caricature—a sex-driven female, wolf and will and always willing, devastatingly beautiful and urgent to have…and destroy…any man who crosses her path. A bit of that works well; too much, and the novel seems to be striving for a subtitle: “ A Sex Manual for Werewolves.”

Wolf’s Cut is also bulky, wordy at times, with a fair number of malformed sentences that, for me at least, interfere with the story it so wants to tell. And there is a story, almost buried under all of the difficulties. The tribe’s struggle against the mob; a reservation doctor’s struggle with problems internal and external; Nick Lupo’s struggle with his basic identity—all of these could blend into a strong, taut, well-told horror-thriller. Just not this one.