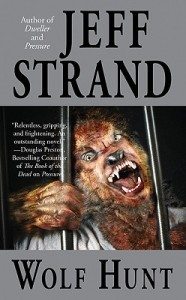 Several years ago, when I was in the midst of a particularly difficult depressive episode, my wise and loving wife brought home the video of the 1997 film MouseHunt, starring Nathan Lane and Lee Evans. The non-stop, over-the-top silliness of two brothers—a classic Mutt and Jeff combination—trying to capture a tiny mouse infesting a house broke even my reserve. I actually laughed out loud, a rarity for me. And it certainly helped bring me out of the shadows.

I had much the same feeling when I read Jeff Strand’s 2010 novel, Wolf Hunt…and I can’t help but wonder if the parallelism in the two titles was intentional.

I came to the novel in a round-about way. A friend had posted on Facebook a link to the “Ultimate Supernatural Thriller Box Set,” an eBook collection of six novels…on sale at the time for $.99. At 16.5¢ a novel, how could I go wrong?

The “Box Set” (which never quite materialized in three-dimensional glory) included F. Paul Wilson’s Virgin; Jack Kilbourn and J.A. Konrath’s Haunted House; Blake Crouch and Jordan Crouch’s Eerie; Scott Nicholson’s Speed Dating with the Dead; Jeff Strand’s Wolf Hunt; and Iain Rob Wright’s The Final Winter. Since I was coming off a long editing job and had just finished a serious, thought-provoking terrorist-thriller, I figured I owed myself some down time.

So I started with Jeff Strand’s Wolf Hunt.

Not far into the novel, I realized that Strand’s story-arc paralleled the film’s. In the film, the two men must eradicate a (mostly) innocuous mouse. At first, they are confident…then the balance begins to tip in favor of the mouse. Eventually, nothing seems too great a sacrifice to destroy one tiny, cutesy rodent.

Now replace the house with the Florida Everglades. Replace the brothers with two moderately intelligent, mid-level, job-focused thugs fresh from a retaliatory thumb-breaking assignment. Replace the quest to get rid of the mouse with a new assignment: moving an unusual  object from Miami to Tampa. And replace the mouse with…a werewolf—a jaw-snapping, blood-thirsty, intelligent (probably more so than the two thugs) werewolf—and watch the body count rise.

What should have been a routine stop to refuel turns into a pitched battle with all of the dogs in the small town, ending up with George and Lou bleeding profusely, garishly wounded dogs hobbling around, one dead gas-station attendant, and a new passenger in the van. Michele is as much kidnapped as rescued, however, since George and Lou realize that they cannot let her escape to tell the authorities that they have imprisoned a man in a cage.

When George stops to confront the man—Ivan—he makes a cardinal error: he steps too close to the cage. From that point, events becomes a pitched battle between George and Lou (with Michele mostly watching from the sidelines) and Ivan, who is, after all of his denials, indisputably a werewolf. An angry werewolf. A vicious werewolf. At first all George and Lou want is to avoid more trouble, with Ivan, with their bosses, with the client who ordered the delivery. Then their goal shifts: destroy the werewolf at all costs. Ultimately, this leads to an extraordinary confrontation between human and non-human…on the slippery lanes of a bowling alley.

Strand has the unique ability to write comedic horror that works flawlessly on both levels. His comedy is intrinsic to his storytelling; nothing so simple as an awkward slip on a banana peel or an easily won cheap laugh interrupts Wolf Hunt. Instead, the characters he develops, the situations he imagines lead inexorably to the comic, while, as noted above, the body count escalates. Strand does not hesitate to show blood and gore, even when it comes to slaughtering innocents; yet at the same time, there is something fundamentally comedic—much as happens in MouseHunt—when the characters suffer wound after wound, disaster after disaster, and, like the Energizer Bunny, simply keep going…and going…and going.