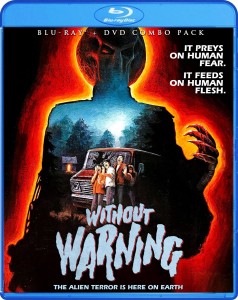 Remember that sci-fi/horror movie where a bunch of people go out to the wilderness and then start getting picked off, one by one, by an alien hunter using bizarre weapons? Yeah, who doesn’t love Predator, but this isn’t that movie. This is the almost completely forgotten Without Warning from 1980. Yes, a full seven years before Arnie’s more famous action/sci-fi flick, there was this one that had the same basic idea. Oh, and for another weird coincidence, the same man that played the predator, Kevin Peter Hall, also played the alien hunter in this. Neat, huh?

And when I say this movie was forgotten, I mean it. Without Warning had a token theatrical release at best and then and tiny VHS release and…well that’s it. It’s never been released on any kind of disc, and it wasn’t one of the early cable stalwarts such as Beastmaster and the like. How forgotten was this movie? Well I have never seen it until I got it for release, and do you know how rare that is for me with an 80s genre film? So was this movie a forgotten gem, or something best left behind and not thought about? Well let’s find out.

Starting off in pseudo-slasher style, something is murdering miscellaneous people in the woods, but instead of using a machete, this killer uses small, flying, fleshy discs with teeth in them. Soon a group of four youngsters goes out to the woods for a swim and some fun and become the next targets of the alien’s hunt. Along for the ride is Jack Palance as a human hunter who wants to hunt the alien hunter, and Martin Landau as a shell-shocked vet who saw the alien years ago, told everyone about it, but no one believed him, which only made him crazier.

There is a style and charm to the movie that always resonates with me, and that largely comes from the time it was made. I make no bones about it, I love movies from the 80s, and this one scratched my itch for that bygone decade. It also has some notable actors in it, such as Palance and Landau, but also a young, hardly recognizable David Caruso as one of the kids. The special effects range from goofy to gooey, with the teeth-gnashing, squeaking alien discs being the highlight.

Not everything is perfect here. The aforementioned Palance and Landau are content to chew through scenery like a wood chipper, and there’s an overlong, and rather boring, part set in a bar that goes nowhere. So this is an unevenly paced film, with a few too any lows in it, to be honest. I also got the impression that some scenes were hacked out for rating purposes. One such part was where a cute girl and David Caruso start to make some sexy fun time in the woods and then BAM nothing. They’re just gone. When we next see them, they’re a couple of hanging corpses in a shack, and it appears that the girl is topless, despite the movie never showing “the goods.” Now I don’t watch these movies for boobies, if that’s all I want to see, I have the internet, thank you very much, but still, this could have been handled better. Something less jarring or obvious, or hey, just show the boobies. That would have made everyone (me) happy.

Now we come to the extras on this new Blu-ray/DVD release from Scream Factory. There is an audio Commentary with Producer/Director Greydon Clark and a passel of new interviews. There are four of them, to be exact, with cinematographer Dean Cundey, co-writer/co-producer Daniel Grodnik, special make-up effects creator Greg Cannom and actors Christopher S. Nelson and Tarah Nutter. All together, these interviews run about 54 minutes. The original theatrical trailer and a still gallery can also be found here, and all this for a movie most people have never heard of. Is it any reason I love Scream Factory?

Without Warning is not a perfect movie, but it is a load of fun. It is far better than many low budget flicks, and light-years better than pretty much anything put out by SyFy or Asylum Pictures, and so I am very happy it has been saved from cinematic obscurity by Scream Factory. The fact that it looks amazingly good on Blu-ray and comes with a bunch of neat extras is just one hell of a bonus. If you’re a fan of 80s flicks, or a collector of little known movies, you’ll want to get this new combo pack. It is well recommended by this child of the 80s.