Witches of East End to Premier on Lifetime in October

When I think of horror TV, of course I think about Lifetime.  After all, they go together like peanut butter and axle grease.  But seriously, it looks like Lifetime is trying to add a story with a little horror element to their lineup.  I’m curious to see how this pans out.

from the press release: 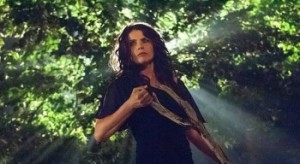 THE WITCHING HOUR IS COMING…

LOS ANGELES, CA (July 26, 2013) – The witching hour is coming…get ready to meet the Beauchamps, the Witches of East End…

Inspired by Melissa de la Cruz’s New York Times best-selling novel, Witches of East End centers on the mysterious Beauchamp family: free-spirited artist Joanna (Ormond) and her two grown daughters, wild-child bartender Freya (Dewan Tatum) and shy librarian Ingrid (Boston), both of whom are unaware that they are gifted (and cursed) with a magical birthright.  Freya is recently engaged to the man of her dreams, wealthy playboy Dash Gardiner (Winter), but when she finds herself inexplicably drawn to Dash’s troubled, enigmatic brother Killian (DiTomasso), bizarre occurrences begin to manifest in her life.  Meanwhile, Joanna’s long-estranged sister Wendy (Amick) shows up with a warning that could change the Beauchamps’ fate forever, forcing Joanna to reveal to her daughters they are, indeed, immortal witches who possess great untapped powers.  With their idyllic small town life now turned upside down, and a formidable and ancient enemy intent on ending the Beauchamp family line, will Freya and Ingrid be able to accept their true potential before it is too late?

Produced by Fox 21 (Homeland, Sons Of Anarchy), Witches of East End is executive produced by Maggie Friedman (Eastwick), Jonathan Kaplan (Without a Trace, ER), Erwin Stoff  (The Matrix) and Josh Reims (Brothers & Sisters).  Kaplan will also serve as the producing director on the series.  The pilot was directed by Mark Waters (Mean Girls) and written by Friedman.

Witches of East End will be Lifetime’s second scripted drama to premiere this year.

Lifetime is a premier female-focused entertainment destination dedicated to offering the highest quality original programming spanning scripted series, non-fiction series and movies.  In 2012, as a result of its aggressive programming strategy that doubled the hours of original programming, Lifetime posted its strongest year-on-year growth among the key demographics in 10+ years, while also reaching its youngest median age in 16 years.  Lifetime Television®, LMN®, Lifetime Real Women® and Lifetime Digital™ are part of Lifetime Entertainment Services, LLC, a subsidiary of A+E Networks.  A+E Networks is a joint venture of the Disney-ABC Television Group and Hearst Corporation.