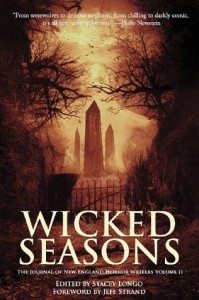 I am writing this review during a typical New England blizzard.  The power is still on–a plus; but there is absolutely no way to get to Dunkin Donuts–a major minus.  Having lived elsewhere, or perhaps having lived two decades in Boston and Cape Cod, I can recognize when something is distinctly New England, such as a nor’easter or a clam bake, and Wicked Seasons falls into that category.

The first New England common denominator: the booze.  New Englanders have a particular way of drinking and particular response to drink.  Playing armchair psychiatrist, I would chalk this up to the endless depressing winters and the insurmountable taxes.  Wicked Seasons contains several stories featuring drunks, alcoholics, and newly sober but highly tempted characters.  James A. Moore’s “Spirits” handles the need for drink with a heart-tugging realness.  Other stories have alcohol play a bit part, but it compels the action into often violent and delightfully surprising places.

The second common denominator: the tip of the hat to old school horror.  New England’s horror roots dig deep and that can be seen in this anthology.  My favorite story of the bunch was Rob Smales’ “A Night at the Show”.  This story is a smidgen Robert Bloch, mixed with a bit of Richard Matheson, seasoned with a little “Alfred Hitchcock Presents.” It evoked the types of stories that drew me to the horror genre when I was very young.  Christopher Golden’s “The Secret Backs of Things” was another tale with a “classic tone” that stayed with this reviewer long after reading.  I have always been a sucker for a clever conclusion.

Wicked Seasons is an eclectic collection, with something for everyone.  There is the poetic “The Widow Mills,” and the fairy-tale gone wrong “The Girl Who Wouldn’t Break.”  There are monsters: “The Basement Legs,” and “Lycanthrobastards.”  There are killers and dismembered bodies, and, for some reason, a plethora of maintenance men.  There is equal parts violence and gore, and psychological horror.

Perhaps the dreary eleven months of winter inspires the snow bound to write.  There are certainly plenty of talented horror writers in the New England area with chilling tales to tell.  For Wicked Seasons, editor Stacey Longo selected wisely.  This is the perfect anthology for reading beside a fire on a biting winter’s day.  The writers are accomplished and the stories are very entertaining.