Who Cares About Black Friday When We’ve Got A Black Christmas?! 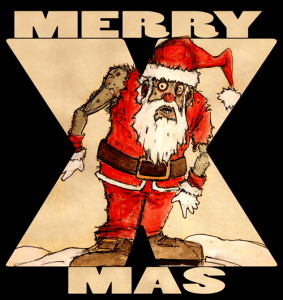 Who Cares About Black Friday When We’ve Got A Black Christmas?!
By Brandon Engel
Image by Byron Rempel

Many people traditionally enjoy watching Christmas movies with their families on the day after Thanksgiving, Black Friday. If you’re a fan of horror movies and therefore enjoy viewing something a bit more spine-tingling than the standard holiday fare, you can still get into the spirit of the season. Check out these five terror-inducing flicks with a Christmas theme!

5. To All a Goodnight

In this 1980 by-the-numbers slasher film, the students of an all-girls school invite their boyfriends over for a Christmas party. The fun soon turns to horror, though, as an unknown assailant – dressed as Santa – begins killing them. While there’s nothing inspired in either the storyline or the cinematography, they’re both competent and reasonable. David Hess, of Swamp Thing and Last House on the Left fame, directed To All a Goodnight, but he doesn’t appear onscreen for even a single second. Perhaps the best-known of the actors in this effort is the porn star Harry Reems, who is credited as “Dan Stryker.”

Produced in the United Kingdom and released in 1984, this movie depicts the hunt for a serial killer whose victims are men dressed as Santa Claus. The killer dispatches the Santas in a variety of ways, including stabbing, burning and shooting, while incompetent police officers attempt to track him down. Don’t Open doesn’t appeal to every palate; it features a hole-ridden plot, poor production values and surprisingly graphic violence. Still, the film works well as cheesy entertainment if you don’t try to take it too seriously. The producer, Dick Randell, is considered a master of low-budget, blood- and sex-drenched films, and this installment will likely satisfy fans of the genre.

This plot of this 2005 Canadian release hinges on the unlikely premise that Santa was forced into spreading good cheer and happiness for 1,000 years as a result of losing a curling match against a disguised angel. Now that the thousand years are up, he can revert to his sadistic, murderous ways. Starring Bill Goldberg as the evil Santa, Santa’s Slay alternates between funny, ridiculous and gory. Despite sounding, and in many ways being, little better than a B movie, this film somehow attracted a fairly respectable cast. Rebecca Gayheart, Fran Drescher and James Caan all feature prominently. For reasons that are unclear, Caan’s role was uncredited.

A classic tale of Christmas horror, Gremlins tinkers with many aspects of cultural folklore and cinematic conventions and twists them into something sinister. The titular creatures appear cute and harmless, but a failure to follow three simple rules when dealing with them causes them to multiply and metamorphose into destructive monsters. Beloved by critics and audiences alike since its release in 1984, it grossed more than $150 million on an $11 million budget. Zach Galligan and Phoebe Cates starred while Howie Mandel provided much of the voice work for the gremlins. Although there was a sequel in 1990, the original is considered far superior.

Unlike many of the films on this list, Black Christmas plays as straight horror, without much in the way of self-referential comedy or campy hijinx. The denizens of a sorority house began receiving threatening phone calls a few days before Christmas. The girls then go missing one by one, killed by a mysterious murderer known only as “Billy.” This Canadian movie adeptly builds suspense and psychological terror despite depicting only a few short scenes of actual violence. This was the film that likely inspired filmmakers like John Carpenter to make Halloween (just as it inspired sororities everywhere to order ADT home security setups!) Starring Keir Dullea, Olivia Hussey and Margot Kidder, Black Christmas has been rated favorably by critics and film-goers alike over the years although it initially caused concern among worried moralists.