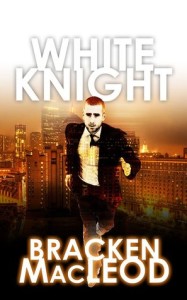 Given the combination of white-knuckle thrills, deep characterization, and existential questioning in Bracken MacLeod’s 2013 debut novel Mountain Home, this novella has a lot to live up to. In many ways it’s a very different work, but fans should rest easy. This is high-caliber crime fiction with heart. MacLeod’s penchant for moral ambiguity is in full swing here, and White Knight probes the sickening depths of violence and abuse with keen, devastating precision.

The white knight of the title is an assistant district attorney with a tragic past, who feels helpless amidst bureaucratic red tape and people who turn a blind eye to everyday atrocities. When he goes beyond the line of duty to help an abused woman, that isn’t the only line he ends up crossing. Before long his life and the lives of others are at stake, and though he’s a good guy, he isn’t afraid to get a little blood on his hands.

It’s not easy to get readers fully invested in a character in such a brief span of pages, but despite the blistering pace of the narrative, White Knight does this admirably. The tight, first-person narration works to maximum effect, the prose wasting no words. The difficult situations faced by the unnamed protagonist wear him down to the bone, yet still he pushes on, whether or not his decisions are accepted as the “right” ones in society’s eyes.

Some of the characters he crosses are outright despicable, with no redeeming qualities. Despite this, they feel like regular people you might pass on the street. Just as in Mountain Home, there’s a lot of bleakness here, but it isn’t forced. Addiction, justice (of the legal and vigilante varieties), abuse, and a cornered person’s capacity for violence are at the forefront, and they’re all dealt with honestly and respectfully.

White Knight is a smart, stylish gut-punch of a book, a novella that crime fiction fans should push to the top of their lists. Highly recommended.