Where You Live – Book Review 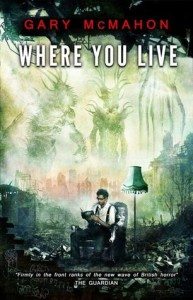 In 2012, Gray Friar Press published a very limited (100 copy) run of Gary McMahon’s collection It Knows Where You Live. This isn’t so much a reissue as a companion piece. It features most of the previously published stories as well as seven others, five of which are original to this collection.

McMahon’s writing is set firmly in the quiet horror camp, focusing on atmosphere and character rather than gore and shock factor. The horror stems from deep-seated fears and anxieties inherent in the human condition, particularly within Western society. Economic uncertainty, failed and failing relationships, invasion of privacy, mental illness, paranoia and addiction, all are present. Characters are largely poor, alienated, or distraught, and the situations they end up in are like waking nightmares tailor-suited to their particular hangups.

In many of the stories, the natural and supernatural are at times nearly indistinguishable, in much the same way as the characters’ internal and external landscapes. In When One Door Opens, for instance, the old adage that gives the story its namesake is given a literal interpretation. In this story a job seeker finds himself unable to open any doors at all. He makes his way around as best he can, only to find himself in a labyrinthine succession of invisible lines he simply can’t cross. It’s a physical manifestation of the helplessness and isolation that circumstance has placed on him. The objective reality or unreality of the situation becomes almost irrelevant, as it’s all very real to the character. This coupling of intense introspection and outward dread appears throughout the collection, and works on the reader’s mind and nerves to great effect.

The stories share a lot of the same themes but vary widely in subject. Facades crack and identities shift, dreaming houses haunt people, darkness and claustrophobia chill to the bone, visions of an alien world couple with regret and despair for our all too human one.

Fractured relationships figure prominently in some stories. Truth Hurts is a brilliant take on abusive relationships, looking at the ways in which both truth and lies can hurt people. The twist here is that the scars left behind are physical ones.

In It Knows Where You Live, an emotionally detached husband finds himself obsessed with an obscure horror film that inexplicably arrives in the mail. It’s an unsettling tale in which the lines are blurred between observer and participant in life and death.

While the writing is atmospheric and the stories have a powerful emotional resonance, there’s often a lot of ambiguity in the finer details, leaving the reader with something to think about long after finishing. It’s not an easy task to pull off. Writers like Ramsey Campbell and Shirley Jackson have produced some excellent work in this regard, and McMahon follows in their literary footsteps.

This is true horror. If there are ghosts here, they’re the ghosts of aspiration, of hope and civility. The monsters are the unspoken things lurking in the shadows of places and the recesses of the mind. Gary McMahon has quietly written his way into the upper echelon of contemporary dark fiction writers, and Where You Live is a collection not to be missed.