When We Fall – Book Review 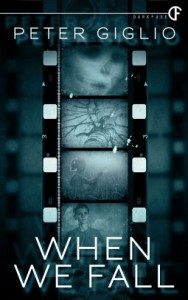 When We Fall is a coming of age novella, more contemporary fiction than horror, but relevant to genre fans. Set in a small Midwestern town one summer in the mid-’80s, it follows 13-year-old amateur filmmaker Ben Brendel as he struggles in different ways with the deaths of his best friend and a boy that he hated. Ben spends much of the summer with Aubrey Rose, his schoolmate, friend and crush. They work on a movie together until something impossible shows up in the developed film and sheds new light on old wounds, turning everything on its head.

Giglio does an admirable job of writing believable, three-dimensional characters, particularly given the book’s brief length. Naturally Ben is the most developed, and he makes a great protagonist. He thinks and speaks in a way that belies his years, but it’s because of his precociousness as opposed to any sort of oversight in the writing, and never seems false. A social outcast, Ben is strong in character nonetheless, which becomes very clear in the later parts of the story.

Death looms throughout, and given the grief that Ben is going through, the tone of When We Fall is steeped in pathos. It’s a subdued work, at times poetic in its imagery and evocation of feeling. There are scenes where the tension is high, but it’s all drawn from the helplessness and fear particular to childhood. Heated conversations between adults, confrontations with bullies that have the potential to turn ugly at any moment, these are the kinds of things that set the heart beating faster here. The ups and downs of life are dealt with honestly, with considerable skill, and without any manipulative trickery.

This is the kind of book for which it’s difficult to go into the plot without giving too much away. It’s a powerful read, though, and a unique and effective foray into the well-trodden coming of age genre. The darkness around the edges only adds to its impact. Recommended for readers of dark fiction in the broadest sense of the term.