What Happens in the Darkness – Book Review 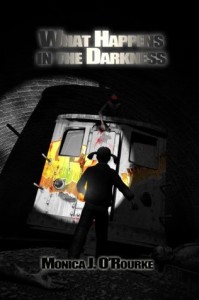 What Happens in the Darkness

“Manhattan died.” With just those two words, Monica J. O’Rourke shows us we’re in for a great story, as usual.

Janelle is a 12-year-old girl who has lost her entire family in one night in a vicious attack. She escapes into the city, but realizes it wasn’t just her family who was lost that night. Amidst air-sirens, car alarms, fire, and devastation, there are also body parts strewn about and people screaming. Her world has gone to hell, and Janelle has no idea why or what she’s going to do now.

Jeff is an Army brat who has taken over his father’s position as the caretaker of a “family” nobody knows about. The head of the family, Martin, demands his family be released as they are dying. Jeff is torn between his duty and his bond with Martin. He knows he shouldn’t let them go, knows they will kill as soon as they are loose. But is it right to just let them starve in their prison?

Janelle and Jeff are not the only ones trying to survive and do what’s right in this apocalyptic world. But as events unfold, it becomes less clear just who the enemies are. Or what they are. And who can Janelle trust to help her survive?

There are many apocalypse stories out there, but What Happens in the Darkness is completely different. This isn’t zombies, a virus, or a comet, but a force unlike any other the world has known.

If you’ve read any of the author’s other books, you know she is brutal and relentless, so be forewarned; there are disturbing scenes that might offend or cause discomfort. But if you can take it, you’re in for a hell of a ride. Don’t miss it.