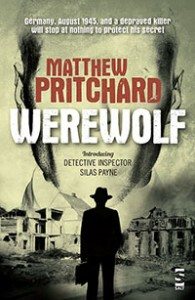 Germany has lost the war and occupying forces are there cleaning up the mess and bringing order to the chaos. Or they are trying. In the British Zone, Detective Inspector Silas Payne from Scotland Yard is called in to investigate a gruesome murder – kind of an understatement in the country that committed so many gruesome murders of its own during that time. But this one was not a war crime by any means.

For those of you who are WWII buffs, as I am, the author does an incredible job bringing readers back to that time, engulfing us in the atmosphere of the end of the war. The good, the bad and the ugly of occupation forces sucks us into a time that hopefully will never happen again. But for this story, it sets the pace and the horror of the upcoming investigation.

The characters involved drag us into the most unusual crime. Detective Inspector Payne runs across a unit of soldiers whose aim is to have a good time, grab some souvenirs, and mess up whatever clues were left at the crime scene. Two dead bodies in the basement of the house – one man and one woman and a table covered with surgical instruments. The man has an unusual tattoo which signified Waffen SS, a German group that was terrifying as many occupiers as possible. Looks like something was interrupted but Payne wanted to know more – all of it.

Payne visits Wolffslust prison in the town and finds that most of the prisoners were let go without even checking what crimes brought them there. He also finds a door that he is unable to open. He immediately has someone come and blast it open. Inside are crates and boxes and piles of paperwork and odd equipment. Among them are skulls, glass jars with internal organs – well, you can imagine. The equipment is the most interesting. Can you wait for it?

Finally, Detective Inspector Payne is led to a man that is still being held in the prison – Amon Toth, ex-SS and ex-Gestapo. The prisoner proceeds to tell Payne that he knows the killer and that he will kill again. But he will only give him the information if he can be allowed to escape the prison, cross the border and get away. Well….

Characters are well written and entertaining in scary and creepy ways – all to set you up for that final chapter. I will leave you with a name mentioned in the very first few pages of the book – Little Otto. Who he is and what he does is why you should read this novel. It will creep you out and leave you to look over your shoulder in the future.