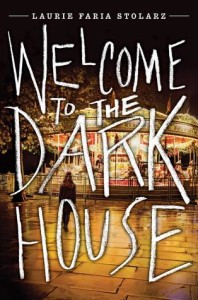 “In a thousand words or less, describe your worst nightmare… and let your nightmares be gone.”

That’s all it took for 7 contest winners to win the chance of a lifetime- an all exclusive, paid weekend; featuring a behind- the-scenes look at the horror sensation and director, Justin Blake of the Nightmare Elf, and his latest film.  Promising to give them a weekend they won’t forget.

For Ivy Jensen, nothing sounds better than the chance to rid her life of the nightmare that haunts her every night, the one with the bird-like eyes of the serial killer that murdered her parents. Ivy finally decides to enter the contest, even though she hates horror movies, for the chance to escape the vision.  Along with nightmare contest winners: Parker, Garth, Taylor, Frankie, Shayla, and Natalie, each holding onto their own dark secrets, looking for the promise to change their lives by meeting their icon. With their extreme obsessions, comes extreme personalities, causing the drama of the Dark House to unfold as soon as they all arrive.

When the contestants are picked up in a hearse and brought to the Dark House, each of their weekends starts off as a fun, horror-themed adventure, in a look-a-like set to the movies, complete with Midge, the serial killing chambermaid from the movie Hotel 9. With details like this, the Justin Blake fanatics live up to the promise of amazement. What all starts as fun and games, quickly turns into a deadly game of cat and mouse, when one contestant disappears shortly after she arrives, blood lines the back of her closet reading, “Get out before it’s too late.”

Their weekend turns from fun to deadly, when they are driven to an abandoned carnival in the middle of the woods. A Carnival, complete with the rides: “Train of Terror,” “Forest of Fright,” “Graveyard Dig,” and a merry-go-round that plays an out-of-tune melody. Where their nightmares are the ticket in, and surviving their nightmares are the way out. A place specially designed to release the teens’ nightmares into reality, leaving the group with the sickening feeling that they were never meant to survive in the first place.

Laurie Faria Stolarz takes you on a thrilling and terrifying ride with the introduction to her new series, Welcome to the Dark House, a tale meant to haunt you into the thrilling depths of fear itself. With a nod toward the classics, Laurie Stolarz keeps the thrilling tempo with murdering clowns, serial killers, and a deadly house of mirrors, producing images that tap into that carnal fear of living out your worst nightmares.