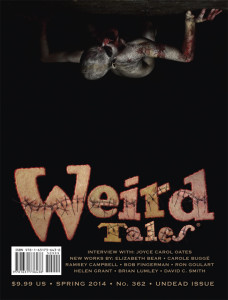 Continuing the successful concept of themed issues, #362 is our unsettling, but entertaining, Undead issue.

And as always, there is also a sizable amount of un-themed fiction included in this issue. Issue #362 contains a mixture of themed and un-themed weird fiction and poetry along with sprinkling of non-fiction.

Some of the Contributors to Issue #362 “Undead Issue,” along with many other talented writers, are:

The front cover art is by Danielle Tunstall with a Richard Matheson tribute painting on the rear cover by Jeff Wong.