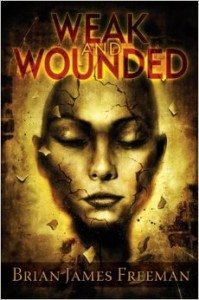 The magnificent Brian James Freeman, the publisher of Lonely Road Books and the author of The Painted Darkness, Blue November Storms, More Than Midnight, and Black Fire, is back with a new anthology of short stories.  In this excellent collection, Weak and Wounded, the author ties all five stories together by leading the reader in one direction, and then on the very last page, slamming him in the side of the head and dragging him off, kicking and screaming, into another direction.

As Hannibal Lector might say, “This is rather slippery of you, Mr. Freeman.”

Oh, I should also point out that the author seems to have an innate distrust of therapists.  Of course, if the therapist looked like Gillian Anderson from Hannibal, it might be different.

The new anthology opens up with a short Introduction by the profound actor and writer, Ron McLarty.  This is quickly followed by the “Running Rain,” “Making the Passage of Time,” “Where Sunlight Sleeps,” “The Last Beautiful Day,” and “Walking With the Ghost of Pier 13.”

The first short story is “Running Rain,” which centers on a man who jogs around a small town as a way of wrestling with the deaths of son and several other teenagers at the hands of the Riverside Strangler.  The pain hasn’t lessened, but the man has come to grips with the horrible tragedies.  The real question to ask is who is the Riverside Strangler and why did he suddenly stop killing?  The answer might just be in the story, if the reader pays close enough attention.

The second story is “Making the Passage of Time.”  In this particular piece of fiction, a young couple is watching TV in bed when the world unexpectedly comes to an end.  Everything happens so fast that they only have minutes to prepare themselves for the inevitable.   As John and Julie barricade themselves inside the guest’s bathroom, stabling sheets of plastic over the door and vent, they begin thinking about how time is measured.  The seconds are counted by them as the final moments in time draws nearer and their lives reach the apex of everything they once believed in.

“When Sunlight Sleeps” is the next short story in this brilliant anthology.  In this tale of the macabre, a man takes his son out every Saturday on what’s called the “Mommy Tour.”  You see, the man’s wife died six months before, and the little boy’s therapist suggested the tour as a way for him to open up the hidden spot inside himself (the place where sunlight never sleeps) and to eventually talk about his mother’s death.  On the tour, the father takes his son where his parents worked and where they first met.  Last is a tour of the Scenic View location in the national forest that the parents used to visit on a regular basis before the wife passed away.  Of course, this being a story by Brian James Freeman (think Stephen King), the ending is rather revealing with a slight twist that takes the reader in an entirely different direction.  And, it’s not necessarily a pleasant direction, either.

The fourth story is “The Last Beautiful Day,” and this one involves a man, whose wife lost her baby in the beginning stages of child birth.  The man’s therapist makes the suggestion that he might handle the grief better if he takes a part-time job at the hospital (never listen to your therapist).  Unfortunately for him the work entails dealing with people who have just lost their child.  Though he hates the job, the man feels needed and responsible to those who have lost a newborn.  It might be a beautiful day for others, but certainly not for him.

The final story is “Walking With the Ghosts of Pier 13.”  The United States has been under attack by extremist fronts and outright terrorists, who desire nothing better than to blow themselves up amidst a crowd of people, taking dozens of innocent lives with them.  A man visits Pier 13 on the coast of New Jersey where his brother was killed years before in a terrorist explosion.  He wants to retain the memory of his brother and not let it die as newer memories push their way to the forefront of his mind.  By the time the reader reaches this final story, he’s subconsciously searching for the twist that Brian James Freeman is so good at delivering.  It’s here in spades as the man decides to visit New York City for one last time in remembrance of all the angry young men out there who desire to be heard.

One trait that author, Brian James Freeman, has is his richness with words.  This is a writer that Dean Koontz might have mentored in his younger days.  Mr. Freeman always manages to choose the correct word to depict a scene or to convey a character’s emotional outlook.  You know the old saying about a picture being worth a thousand words?  Well, with Mr. Freeman’s skill as a wordsmith, a single word is definitely worth a thousand pictures.  This man knows how to write and to paint pictures inside the reader’s mind with his craftsmanship.  At no time does the unveiling of a story seem forced or coerced.  Rather, the words and sentences appear to flow effortlessly like molasses onto a hot bun, drawing the reader not only into the delightful tale, but also into the mind of the author.

I have to tell you that I’ve seen some pictures of Brian James Freeman.  And, to all appearances, he seems to be perfectly normal.  I mean he doesn’t have two heads, or horns, or anything of that nature.  Still, it’s that mind of his that has you guessing and wondering about what devious new ideas are being brewed and stirred.  Because I can guarantee you that they are, and that it won’t be long before he puts them down on paper to share with his growing legion of fans.