Want to mix some Lesbian Erotica with your nightly horror reading? 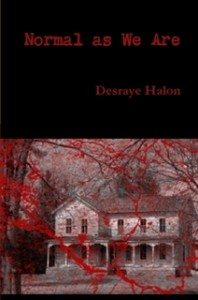 NORMAL AS WE ARE, a horror novel written by Desraye Halon.

Normal as we Are begins in Portland, Oregon. The book involves an unusually bizarre murderous triangle revolving around three women, a love story of sorts. In it, Mitch, Crista and Tara, open their lives up to a world of kidnapping, rape, torture and killing of women, just so they can be whisked away from their mundane lives. Then, the unthinkable happens: One of the women takes it upon herself to kidnap a woman on her own, putting all of them in jeopardy of losing all they have created. Will this destroy them or will all the lies come to a head in this woman-on-woman erotic, twisted death trap? You may never look at anyone the same again.

She lives locally in Phoenix, AZ, and was born and raised in Gary, IN.

Available at LuLu.com and Amazon Kindle